SEOUL, March 23 (Yonhap) -- The number of part-time workers in South Korea grew at the fastest clip among major economies over the past decade since the global financial crisis due largely to increased labor costs, a report showed Monday.

The number of South Koreans working fewer than 30 hours per week came to 3.22 million in 2018, up a whopping 49 percent from 2.17 million in 2008, according to the report from the Korea Economic Research Institute (KERI), the research arm of the Federation of Korean Industries.

The growth rate was more than three times the 14.9 percent average for seven countries with a per-capita gross domestic product of US$30,000 or more and a population of 50 million or more -- South Korea, Japan, the United States, France, Italy, Germany and Britain. 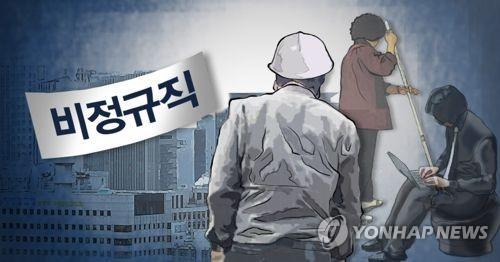 Japan placed second with 26.6 percent, followed by Italy with 13.3 percent, France with 12.3 percent and Britain with 9.9 percent. Germany came next with 9.5 percent, trailed by the U.S. with 7.5 percent.

South Korea also registered the highest on-year growth rate of 4 percent over the cited period, with Japan trailing with 2.4 percent.

South Korean part-time workers accounted for 12.2 percent of its total workforce in 2018, up from 9.3 percent 10 years earlier. It was the second-highest growth pace after Japan's rise to 23.9 percent from 19.6 percent.
(END)