Foreign investors owned 55.37 percent of Samsung Electronics, the world's No. 1 smartphone and memory chipmaker, as of Friday, according to the data from the Korea Exchange.

It was the lowest foreign stake in the top-cap tech giant, the flagship of South Korea's largest conglomerate Samsung Group, since the 51.85 percent recorded on Dec. 11, 2018.

The decline came amid foreign investors' massive selling of South Korean stocks due to escalating worries over the economic impact of the fast-spreading coronavirus. 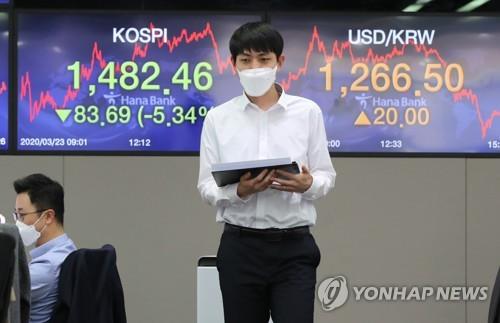 Offshore investors' net selling of South Korean stocks lasted for the 13th session Monday, with their cumulative selling amounting to some 9.8 trillion won (US$7.7 billion).

Samsung Electronics bore the brunt of the foreign sell-offs, with the amount reaching some 4.4 trillion won over the cited period.

In contrast, South Korean retail investors extended their net buying of Samsung Electronics to 13 sessions on end Monday, with the cumulative amount standing at 4.2 trillion won.

Retail investors' massive purchases of Samsung Electronics came despite local brokerages' downgrades of first-quarter earnings estimates for the tech titan due to the fallout of COVID-19.
(END)