SEOUL, March 24 (Yonhap) -- While South Korea has been implementing strict quarantine measures against arrivals from Europe, there are also growing calls that the country needs to apply stepped-up quarantine steps, such as virus tests, on passengers coming from the United States, medical experts said Tuesday.

South Korea in recent weeks has been focusing on stemming imported virus cases after COVID-19 was declared a pandemic by the World Health Organization earlier this month.

As of Tuesday, there were 171 imported cases out of the country's total 9,037 cases, according to the Korea Centers for Disease Control and Prevention (KCDC). Of the 76 new cases reported Tuesday, 22 were overseas infections, with 18 of them coming from Europe.

To better control virus cases coming from overseas, South Korea last week decided to implement stricter screening procedures on all arrivals, requiring them to install a self-diagnosis app and fill out health questionnaires.

Starting Sunday, all travelers from Europe were required to take COVID-19 tests and undergo a two-week quarantine regardless of symptoms.

Of the 1,444 people who landed in South Korea from Europe on Sunday, 19 tested positive for the virus, according to the Korea Centers for Disease Control and Prevention (KCDC). 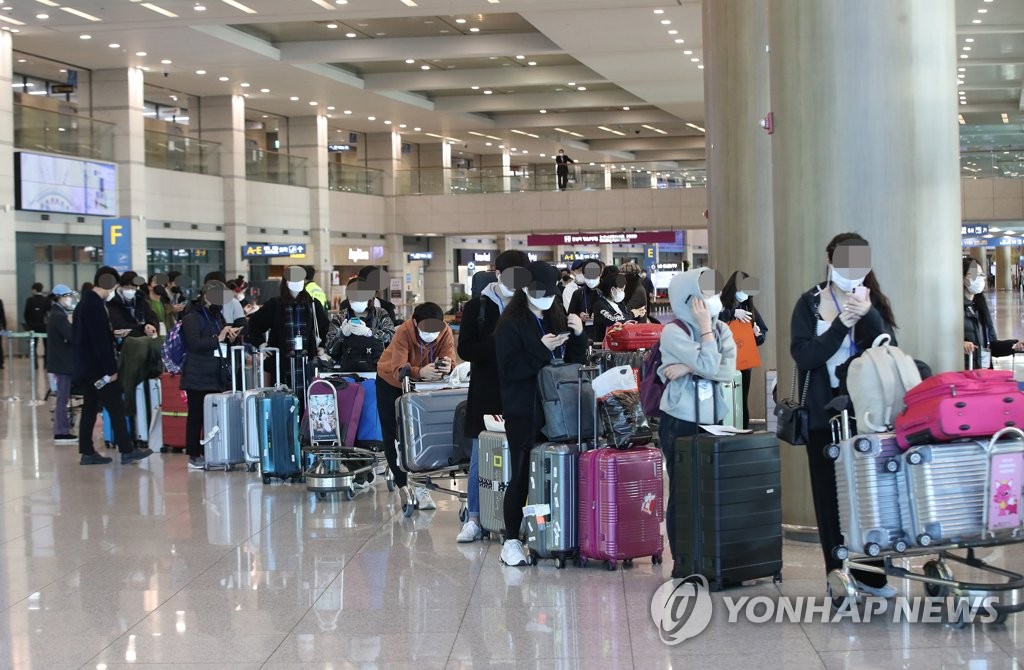 As the number of European arrivals with COVID-19 symptoms increase, South Korea on Tuesday announced that foreigners coming from Europe for long-term stays will be first quarantined at an isolation facility and then get tested.

As of Monday, the number of COVID-19 cases in the U.S. surpassed 33,400, according to the U.S. Centers for Disease Control and Prevention, the third largest in the world after China and Italy.

"As the number of virus patients increases quickly in the United States, health authorities should conduct virus tests on all arrivals from North America," said Kim Woo-joo, a professor of infectious medicine at Korea University Guro Hospital.

Experts warned that the number of imported cases involving U.S. travelers could increase. Of the 14 new imported cases reported on Monday, eight of them were from the United States.

Doctors said that arrivals from the United States should also be quarantined for two weeks even if they test negative for the virus because of the virus' incubation period and possible asymptomatic carriers.

"Not only people coming from Europe but also arrivals from the United States need to enter self-isolation for two weeks," said Uhm Joong-shik, a doctor at Gachon University Gil Medical Center. "Considering that more than half of arrivals from Europe and the United States are South Korean nationals, most of them will be able to put themselves in self-quarantine here."

On Monday, the KCDC said it plans to gradually expand containment measures on arrivals from the U.S.

South Korea is currently covering all expenses related to the testing of suspected cases and treatment of those infected regardless of nationality as a preemptive measure to protect citizens here, according to the KCDC,

The government also pays living costs to foreigners if they are found to have close contacts with virus-infected people here and are required to enter self-quarantine following health authorities' epidemiological investigation.

However, the state will not provide living costs for European arrivals during their 14-day quarantine period, according to the KCDC, since they came to the country on their own decision.