SEOUL, March 25 (Yonhap) -- The defense ministry temporarily shut down part of its main building in Seoul for anti-coronavirus disinfection work Wednesday after one of its officials had close contact with a family member confirmed to have the virus.

The Army colonel assigned to the ministry is now in isolation at his home after the relative tested positive for COVID-19 upon returning from an overseas trip, the ministry said.

"Upon learning that his family member was infected with the virus, the official also underwent the test and is waiting for the result, which is expected to be available later today," another official said.

Access to several floors of the building in the Seoul compound was denied from earlier in the day, and when they reopen could depend on the result of his test, he added.

So far, no confirmed cases have been reported among those working in the compound, which accommodates several key defense facilities including the main building of the Joint Chiefs of Staff (JCS). 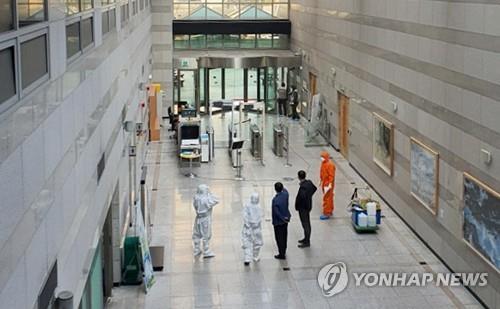