SEOUL, March 25 (Yonhap) -- Executives of Korean Air Lines Co. will return part of their wages from April to help the company survive the worsening business environment due to the coronavirus outbreak, the company said Wednesday.

Executives' salaries will be reduced by up to 50 percent starting in April and continuing until the business is back on track, Korean Air said in a statement. 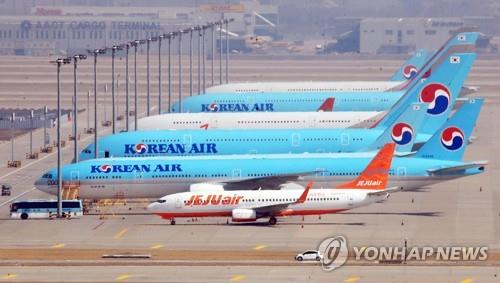 Korean Air has suspended most of its flights on international routes as an increasing number of countries close their borders or take further measures against incoming passengers.

To put that into perspective, Korean Air reduced flights by 18 percent during the 1998 Asian financial crisis.

"This clearly shows how serious the coronavirus-caused impact on the airline industry is. A prolonged virus outbreak would threaten the survival of the company," Korean Air President Woo Kee-hong said in a message to employees.

Early last month, Hanjin KAL, the holding company of airline-to-logistics conglomerate Hanjin Group, announced it will sell low-profit and non-core assets in order to improve its financial status and to focus on its mainstay airline business.

Korean Air has established an internal emergency response committee and a special task force team to evaluate and respond to the crisis caused by COVID-19, the statement said.

Also, the company will utilize passenger jets as freighters to absorb cargo-carrying demands while striving to reduce operating costs, it said.