He met with the heads of Seegene and four other local producers of novel coronavirus diagnostic reagents -- Kogenebiotech, SolGent, SD Biosensor and BioSewoom.

"You are at the forefront of efforts to overcome the virus," Moon said at the meeting. 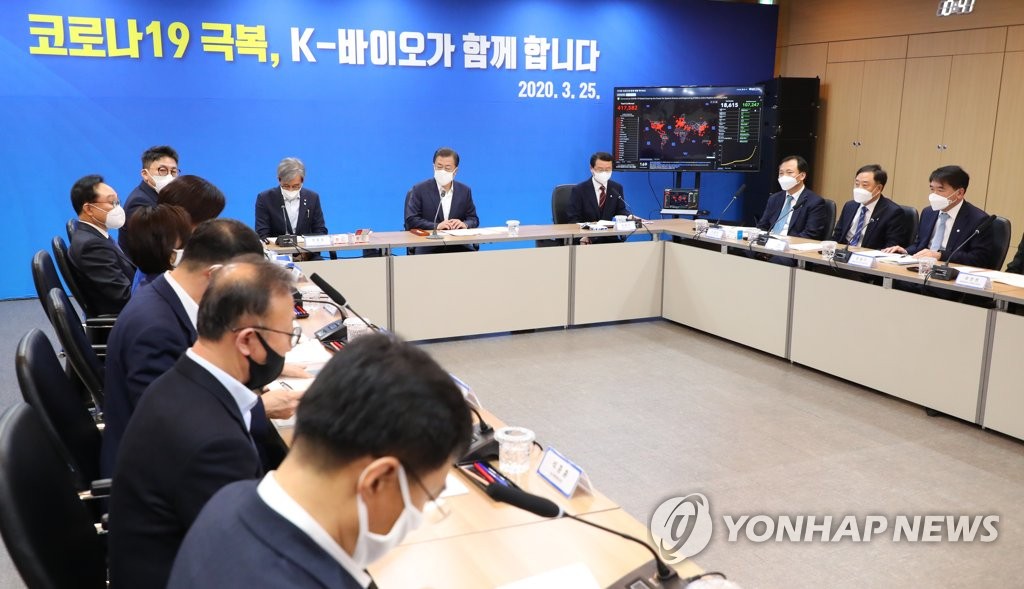 He highlighted that the number of new infections has dropped recently while that of those who have recovered is rising steadily. South Korea reported 100 additional cases Tuesday, with 223 patients declared fully cured on the same day, according to health authorities.

This has been possible thanks to the speedy development of diagnostic solutions by local biotech companies, Moon said. South Korea is widely recognized for "early testing, tracing and treatment" in connection with the outbreak that began in China late last year.

The five firms have manufactured diagnostic reagents to be used for the testing of 135,000 people a day, he noted.

He also said the government has drastically eased relevant regulations as shown by the introduction of the emergency use approval system for newly developed materials.

The Ministry of Food and Drug Safety has cut the administrative process to a week from the average of 1 1/2 years.

"Now, global coordination has become very urgent in regards to both the quarantine and the economy," he said. "Our companies' diagnosis capabilities will play a big role."

The president said the government would continue efforts to enhance the global competitiveness of South Korea's biotech industry.

"Yesterday, U.S. President Donald Trump made a request to us for the urgent provision of test kits and quarantine products," Moon said.

In a press statement, released shortly after Moon and Trump's 23-minute phone conversation, Cheong Wa Dae only said Trump had asked for a shipment of "medical equipment" in response to the pandemic.

Moon replied that his administration is willing to do so if spare equipment is available.