The declaration came in accordance with the U.S. State Department's issuance of a global level 4 travel advisory and USFK installations' increased exposure to COVID-19, USFK said in a release.

"In order to ensure I possess the necessary authorities needed to enforce compliance and protect the force, I have declared a Public Health Emergency for all U.S. commands and military installations in the Republic of Korea," Abrams said, vowing to continue to monitor and assess virus-related situations.

The decision, however, does not induce changes in any of the military's preventive measures being taken, or indicate an increased risk level on its installations, according to his office.

USFK remains at a level "high" risk across the peninsula, and has implemented various control measures to stop the spread of the virus.

The call will remain in effect through April 23, unless it is renewed or terminated sooner by the commander, USFK said.

While noting that USFK has made "significant progress" in containment efforts, Abrams stressed that now is "not the time to lower our guard," and called on everyone to do their part to stop the spread and kill the virus.

As of Wednesday, USFK had reported a total of 10 confirmed virus cases. Nationwide, South Korea had reported 9,137 cases, including 126 deaths, according to the Korea Centers for Disease Control and Prevention (KCDC). 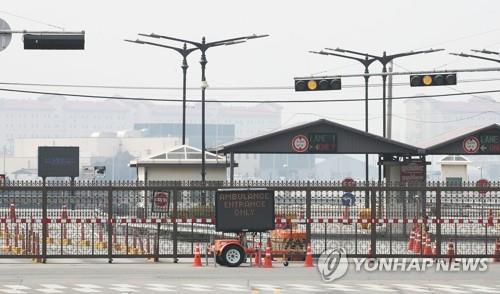