Offshore investors offloaded a net 531.2 billion won (US$431.3 million) worth of local stocks on Thursday.

Since March 5, foreigners have net sold a total of 10.7 trillion won in stocks. They sold a net 1.31 trillion won on March 9, marking the biggest sell-off on record.

Weighed down by the continued foreign selling and profit-taking, the benchmark Korea Composite Stock Price Index retreated 1.09 percent to finish at 1,686.24 points. 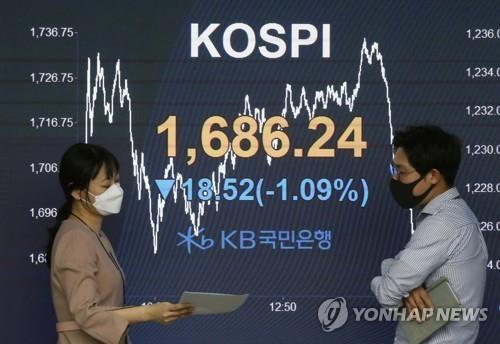 Foreigners' selling spree continued despite the U.S. Senate's approval of a proposed $2.2 trillion virus aid package earlier that day, as markets take a wait-and-see mode. The stimulus measure will be sent to the House of Representatives for approval on Friday (local time).

The South Korean authorities, too, have been taking extensive measures to stabilize the coronavirus-hit financial markets.

The Bank of Korea (BOK) revealed plans to supply an "unlimited" amount of liquidity to financial institutions over the next three months.