SEOUL, March 27 (Yonhap) -- Hyundai Motor Co., South Korea's biggest carmaker by sales, said Friday it will halt its plants in Russia and Turkey, the latest in a series of suspensions due to the new coronavirus outbreak.

Hyundai's plant in Turkey is set to be closed Friday, and no date has been set for its resumption.

Meanwhile, the Hyundai plant in St. Petersburg is set to be shut down from Sunday through April 3, as Russian President Vladimir Putin has declared a nationwide paid holiday next week in a move to stem the spread of COVID-19. 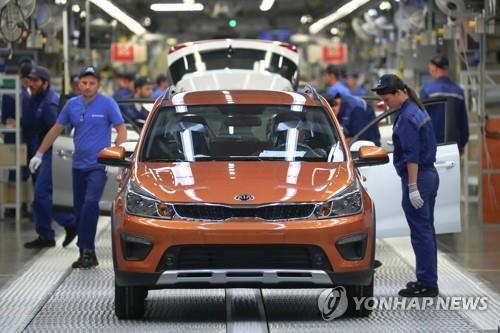 The virus has infected 840 people and killed three others in Russia.

These are the latest in a series of temporary shutdowns of Hyundai Motor's plants in overseas markets over the coronavirus outbreak.

Hyundai suspended its Alabama plant on March 18 after one of its employees there was infected with the coronavirus.

Hyundai has suspended its plant in the Czech Republic for two weeks through April 3 due to virus-caused supply disruptions in Europe.

Hyundai's plant in Chennai, India, also stopped operations Monday, with the suspension due to last through the end of this month.

Hyundai to suspend plants in Russia and Turkey amid virus woes

Hyundai to suspend plants in Russia and Turkey amid virus woes