Lee Hae-chan, chairman of the ruling Democratic Party, made the declaration as the nation has recently been shocked by a sexual exploitation case centered on group chat rooms of the Telegram messenger service.

Cho Ju-bin, a 25-year-old, has been arrested for allegedly blackmailing girls into sharing sexual videos, which were then posted in pay-to-view chat rooms.

At least 74 people, including 16 underage girls, are believed to have been exploited in the case. 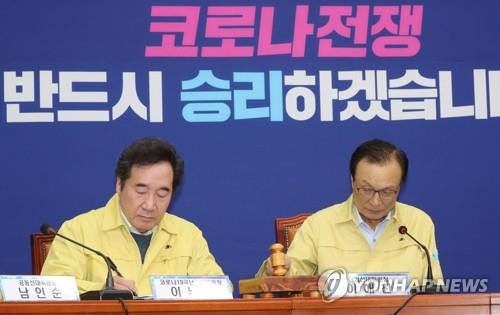 The Democratic Party has submitted three revision bills for the Criminal Law, the Sexual Violence Crime Act and the Information and Communication Network Act to the Assembly, calling for stricter punishment of blackmailing with videos of a sexual nature.

Lee said his party will push to pass the three revision bills, all related to chat room sex abuse, at the parliament in May, stressing the war against digital sex crimes will be fought like the ongoing war on the coronavirus outbreak.

"Digital sex crimes, such as sexual exploitation and the use of hidden cameras, are character assassination, and those who apply for or download such (videos) are co-conspirators who should never be forgiven," Lee said in a party meeting at the National Assembly.

"The chat room scandal is a terrible case that shows how seriously our country's women are living in anxiety and threats."