SEOUL, March 27 (Yonhap) -- Shareholders of Hanjin KAL Corp., the holding company of logistics-to-airline conglomerate Hanjin Group, on Friday approved the reappointment of the group's heir apparent as a member of its board, bringing him a victory in a family feud over the group's control.

His current post has been challenged by a coalition led by his elder sister Hyun-ah that has called for ousting him from the position over the control of Hanjin Group, which has Korean Air Lines Co. as its flagship unit.

The current chairman had sparred with Hyun-ah, 45, known for her "nut rage" incident in 2014, as she formed an alliance with the homegrown Korea Corporate Governance Improvement (KCGI) fund and local builder Bando Engineering & Construction Co. in January to challenge Won-tae's management of the group. 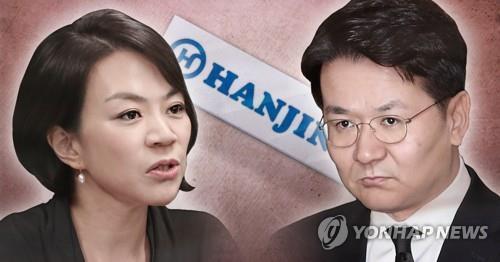 On Friday, Hanjin KAL shares jumped the daily maximum of 30 percent to close at 57,200 won as uncertainties surrounding the company's internal family feud have been lifted, for the time being, while the spreading coronavirus outbreak is having a growing impact on its business.

Shareholders voted against Kim Shin-bae, former executive vice chairman at SK Group and president at SK Telecom Co., who had been recommended by the three-party coalition as a professional manager to replace the current chairman.

The Hyun-ah coalition argued that inviting a professional manager would help improve the group's management, financial status and shareholder value.

KCGI said the three-party alliance's combined stake in Hanjin KAL stood at 42.13 percent as of March 24.

However, the alliance could exercise voting rights over just a 31.98 percent stake they purchased last year during this year's shareholders meeting. 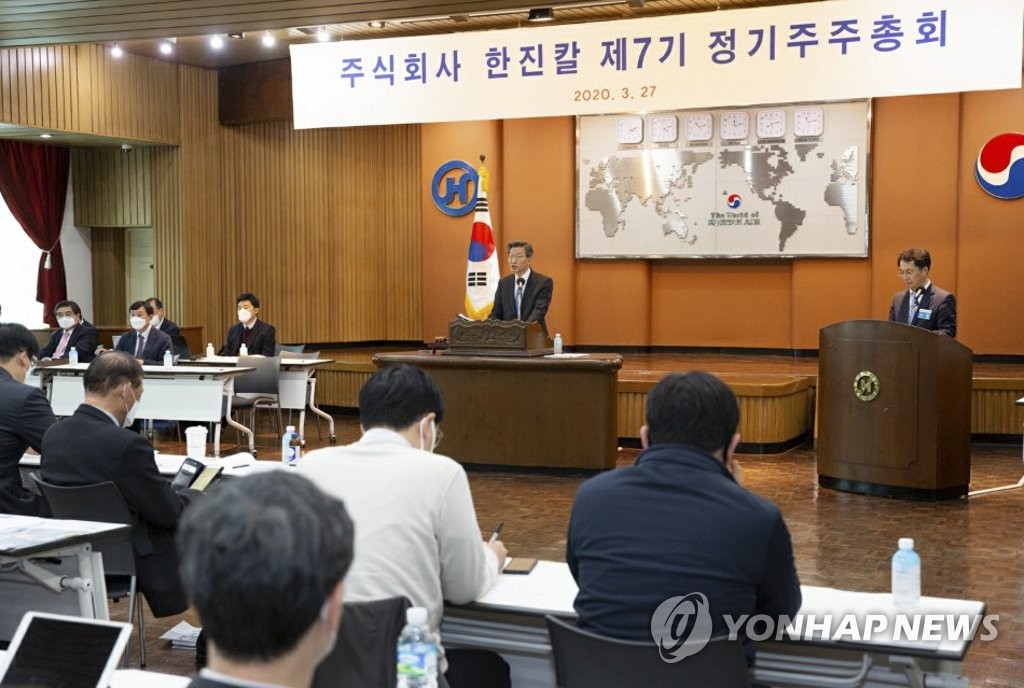 Delta Air and Kakao delegated their voting rights to Hanjin KAL at the annual shareholders meeting, a company spokeswoman said.

The National Pension Service, which owns a 2.9 percent stake in Hanjin KAL, on Thursday said it had decided to vote for the reappointment of Won-tae as executive director.

Looking ahead, analysts said if the three-party alliance continues to increase its combined stake in Hanjin KAL and attempts to gain control of the group in the coming years by holding an extraordinary shareholders meeting, it will remain a major threat for the group's management led by Won-tae.

"Among others, the chairman will have to manage the current coronavirus crisis and then prove his management capabilities during his three-year term as executive director to gain support from shareholders," Shinyoung Securities Co. analyst Um Kyung-a said.