SEOUL, March 27 (Yonhap) -- South Korean stocks rose nearly 2 percent on Friday as investors bet on stimulus measures around the globe to tackle the economic fallout from the novel coronavirus pandemic. The Korean won sharply rose against the U.S. dollar.

After a choppy session, the benchmark Korea Composite Stock Price Index (KOSPI) added 31.49 points, or 1.87 percent, to close at 1,717.73, rebounding from a 1.09 percent drop in the previous session.

The index lost steam in the afternoon, falling as low as 1,668.21, but moved upward again to settle above the flat line. 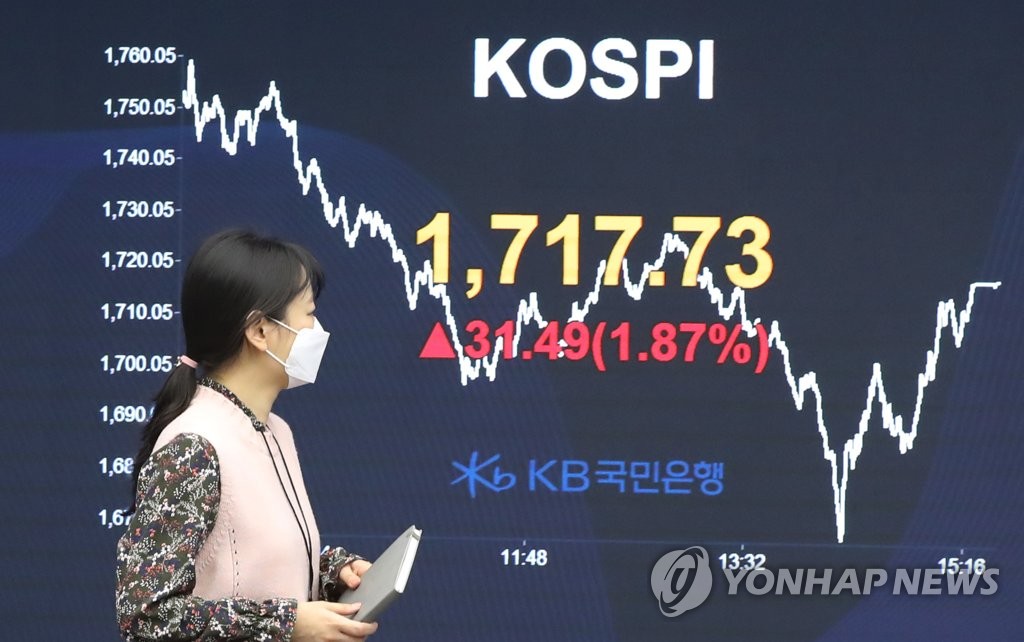 The index got off to a strong start, rising as high as 4 percent, following overnight gains on Wall Street buoyed by the U.S. Senate's passage of a $2 trillion coronavirus relief package.

Investor sentiment also improved after leaders from the Group of 20 advanced economies announced that they agreed to inject $5 trillion into the global economy to overcome the COVID-19 crisis.

"With U.S. stocks rising despite an increase in unemployment benefit claims, it gave a positive impact to the local market," said Seo Sang-young, an analyst at Kiwoom Securities. "But market volatility continued as concerns still remain over the economic impact of the new coronavirus pandemic."

Foreigners extended their selling streak to a 17th consecutive session, offloading a net 373 billion won worth of stocks on the main bourse. Institutions turned net buyers, purchasing a net 132 billion won, while retail investors scooped up a net 170 billion won.

The local currency closed at 1,210.6 won against the U.S. dollar, sharply up 22.2 won from the previous session's close.