SEOUL, March 27 (Yonhap) -- Former South Korean boy band FT Island member Choi Jong-hoon, who is now serving a rape sentence of five years, was sentenced to an additional one year in jail, suspended for two years, on Friday for filming his rape victims and attempting to bribe a police officer to cover up his drunk driving incident.

Choi had previously drawn a five-year jail term from the Seoul Central District Court last November for sexually assaulting women at two drinking parties in 2016, together with disgraced singer and TV personality Jung Joon-young, who was sentenced to six years in prison on the same charges. Their rape cases have since been appealed to a higher court. 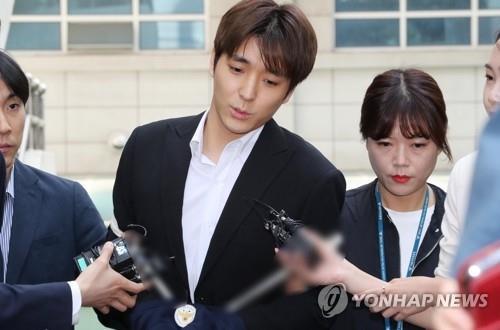 The 31-year-old Choi was additionally indicted later on charges of filming and photographing his rape victims, sharing the footage and photos with friends in mobile chat rooms and offering 2 million won (US$1,650) to a police officer after being caught driving under the influence in February 2016.

The same Seoul court handed out the suspended jail sentence to Choi after finding him guilty of the additional allegations.

It also ordered Choi to undergo 80 hours of sex offender treatment and barred him from employment at children and youth facilities for five years. Prosecutors demanded an imprisonment of one and a half years for Choi in the previous hearing on March 18.

"Choi took naked photos of his victims with a cellphone camera and distributed them online. In addition, he attempted to bribe a civil servant to serve his own interest in his drunken driving case, which undermined the fairness and social trust towards drunk driving crackdowns," the court said.

But the court said it determined the amount of Choi's sentence after considering that he has expressed remorse over his acts.

Choi attended his sentencing hearing wearing a black suit and a face mask.