They arrived at Incheon International Airport, west of Seoul, shortly before noon on an Ethiopian Airlines plane chartered by the South Korean government.

The soldiers are scheduled to be tested for the coronavirus and be self-quarantined for two weeks if they all test negative.

All the troops, however, will be quarantined at the Army Cadet Military School in Goesan County, about 160 kilometers southeast of Seoul, if anyone tests positive for COVID-19, according to the defense ministry. 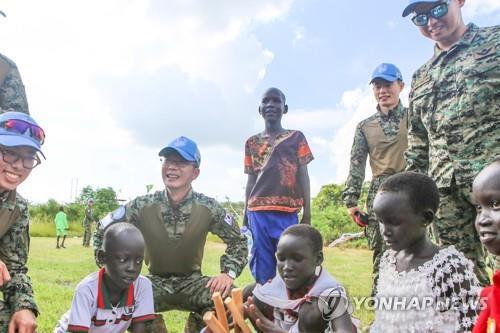 The troops returned home without replacement as South Sudan asked South Korea and other foreign countries not to send fresh troops due to the global COVID-19 pandemic.

Still, some of the 270-strong Hanbit Unit are staying in South Sudan to perform basic surveillance duties until a replacement contingent arrives, according to the defense ministry.

South Korea said it will continue to consult with South Sudan and the U.N. to swiftly send the new 12th batch to the African country at the earliest possible date.

South Korea began troop deployments to the war-torn country in 2013 at the U.N.'s request in accordance with a U.N. Security Council resolution aimed at assisting peaceful reconstruction work.