(ATTN: UPDATES with details of daily update of coronavirus outbreak in paras 7-12)

Of the new cases, 41 involved entrants from overseas -- 23 from Europe, 14 from the Americas and four from unidentified Asian countries, according to the Korea Centers for Disease Control and Prevention (KCDC). Imported cases total 412, accounting for 4.3 percent of the total, it said.

Amid the stready inflow of virus cases from overseas, Prime Minister Chung Sye-kyun said South Korea will enforce a two-week mandatory coronavirus quarantine for all entrants from overeseas starting Wednesday, regardless of their nationality. 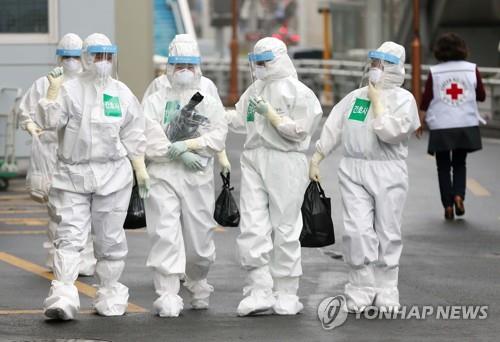 Last year, the church's founder, Rev. Lee Jae-rock, known as a cult leader, was sentenced to 16 years in prison by the Supreme Court on charges of rapes and sexual assaults against several female congregants of his church.

The KCDC asked people to refrain from religious gatherings that could cause close contact in enclosed places.

Still, several churches in Seoul went ahead with Sunday services, while other churches provided live stream services in line with the government's request.