SEOUL, March 30 (Yonhap) -- South Korean cinemas and the performing arts have seen a sharp decline in revenues in the fallout from the coronavirus pandemic, data showed Monday.

Local cinema chains, including industry leader CGV, posted a combined 219.3 billion won (US$179.8 million) in sales from January to the fourth week of March, compared with 467.8 billion won in sales tallied over the first quarter of 2019, according to the data compiled by the Korean Film Council (KOFIC). 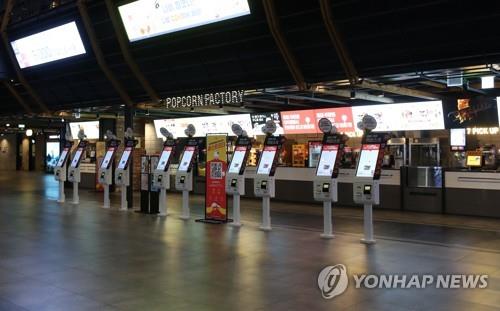 The steep decline came as the COVID-19 pandemic has kept people from going to cinemas for more than two months. South Korea has reported nearly 10,000 confirmed cases of the novel coronavirus since its first case on Jan. 20.

As the government has asked the public to avoid crowded places, the number of moviegoers fell to a 15-year low in February. The daily number of ticket sales reached an all-time low of 25,000 last Monday.

CGV, South Korea's largest multiplex chain, closed about 30 percent of its 116 theaters nationwide Saturday. Megabox, which operates 44 theaters across the country, will shut down a quarter of its operations starting in April.

Lotte Cinema is considering shutdowns if the situation worsens.

Moreover, the cinema chains' overseas business has been affected, as the global film industry has been hit hard by the coronavirus outbreak.

CGV said it has closed 139 theaters in China since Jan. 24 at the request of the Chinese authorities. Some branches, including those in Shanghai and Chongqing, resumed operations last week, but CGV has no plans to reopen other theaters. Its theaters in Turkey, Vietnam and Indonesia have also been closed.

Megabox said it has halted operations of 42 out of 46 of its theaters in Vietnam.
Against this backdrop, a group of film directors, cinematographers, marketers, distributors and theaters have demanded the government come up with emergency plans to aid the industry.

At the same time, the South Korean performing arts scene is also struggling due to the novel coronavirus outbreak.

It is the first time that the monthly figure has dropped below 10 billion won since the beginning of 2020.

Most concerts and shows scheduled for March were canceled or replaced with online projects. Programs at major art centers and halls for April are filled with online performances and recitals behind closed doors.

Separate data from the Federation of Artistic and Cultural Organization of Korea showed that 2,511 shows and performances have been canceled over the January-April period, causing an estimated 52.3 billion won in damage.