SEOUL, March 30 (Yonhap) -- New home permits in South Korea fell nearly 10 percent in February from a year earlier due to a drop outside the capital region, the government said Monday.

Construction permits issued for new homes stood at 37,980 units last month, down 10.1 percent from the same period a year ago, according to the Ministry of Land, Infrastructure and Transport.

New home permits issued in Seoul climbed 6.5 percent on-year to 5,651 in February, and those issued in the capital area edged up 0.8 percent to 26,216. The capital area comprises Seoul and the surrounding Gyeonggi Province, home to nearly half of the country's population of about 50 million.

In contrast, permits outside the Seoul metropolitan area fell 27.7 percent to 11,764.

February's overall decline came amid the negative economic impact of the novel coronavirus outbreak that started to grip South Korea on Jan. 20.

By type, construction permits for new apartments fell 11.8 percent on-year to 30,327 in February, and those for other types of housing, such as row and detached houses, declined 2.7 percent to 7,653.

Amid the drop in construction permits, the number of groundbreakings for new homes shrank 2.4 percent on-year to 23,373 last month, according to the ministry. 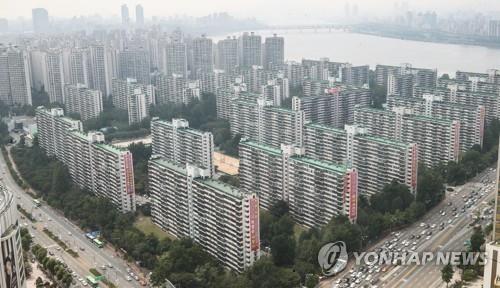