SEOUL, March 30 (Yonhap) -- North Korea lashed out at U.S. Secretary of State Mike Pompeo on Monday for seeking continued international pressure against the regime while calling for the resumption of dialogue.

In a statement carried by the North's Korean Central News Agency (KCNA), the North's "new director" in charge of negotiations with the U.S. threatened Pyongyang will take its "own way" amid stalled talks over its nuclear program.

The official accused Pompeo of encouraging other nations to stay committed to applying diplomatic and economic pressure against North Korea during a press conference last week after a video conference among foreign ministers of the Group of Seven (G7) major economies.

"The initiative for dialogue that the U.S. has proposed to earn time and create environments favorable for its president was seriously damaged," the statement read. "His words led us to lose will for dialogue for sure again."

The official then claimed, "However great and strong the friendly relationship between the leaders of the two nations is, it cannot change the U.S.' hostile policy against us."

President Donald Trump has boasted of his good relations with North Korean leader Kim Jong-un. Last week, North Korea said that Trump sent a personal letter to Kim and expressed his intention to help Pyongyang fight against the coronavirus. But Pyongyang has not responded to the U.S. offer, according to Pompeo.

The North Korean official then warned the U.S. not to provoke the North, which would only to lead to adverse consequences.

Negotiations between the two sides on the North's nuclear weapons program have been stalled since the no-deal Hanoi summit between Trump and Kim in February last year due to wide differences over the scope of Pyongyang's denuclearization measures and Washington's sanctions relief.

Since then, the North has stressed its self-reliance and moved to beef up defense capabilities. Late last year, Kim Jong-un said that he has no expectation that the U.S. would lift sanctions and called for seeking a breakthrough to tackle challenges. 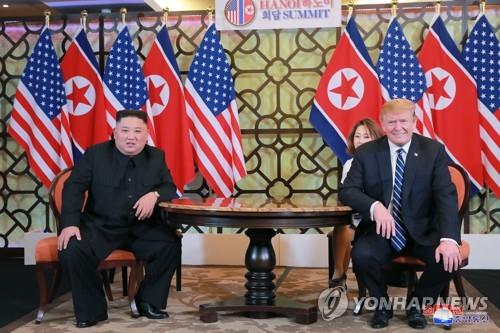