Shin topped the list by receiving 18.18 billion won (US$14.78 million) in wages from seven group companies, including Lotte Shopping Co., according to the companies' public disclosures. Lotte is the nation's fifth largest business group.

He was the highest salary earner in 2017 with 15.2 billion won, but his compensation nearly halved the following year as he returned his earnings while standing trial on bribery charges.

He returned to work in October 2018 as an appeals court suspended his sentence and released him from prison after eight months. Last year, the top court affirmed the ruling.

On the list of highly paid executives from owner families, CJ Group Chairman Lee Jay-hyun came next by earning 12.46 billion won in 2019, according to the company's report. 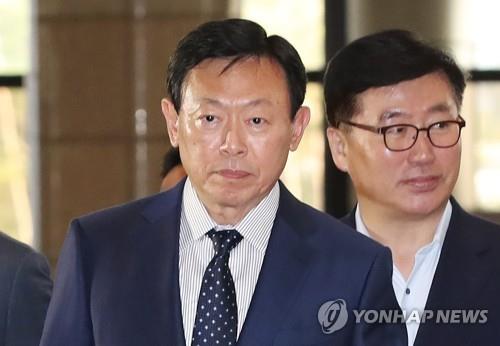 Hyundai Motor Group Chairman Chung Mong-koo got 7.04 billion won last year, down 26.5 percent from the previous year, while the annual salary of his son and heir apparent, Chung Euisun, spiked 75.8 percent on-year to 5.18 billion won, according to the corporate report.

Samsung Electronics Vice Chairman Lee Jae-yong did not receive salary for the third year in a row in 2019 as he faced trial over a graft scandal.

In South Korea, companies are legally required to disclose the salaries of corporate executives who earn more than 500 million won.