WASHINGTON, March 30 (Yonhap) -- The United States looks forward to sitting down with North Korea's leadership for nuclear talks, Secretary of State Mike Pompeo said Monday, shortly after Pyongyang accused him of slandering the regime and said it will "go our own way."

Pompeo was responding to an official North Korean statement that condemned his earlier call on the Group of Seven major economies to continue diplomatic and economic pressure on Pyongyang.

In a telephone briefing with Yonhap News Agency and other Asian news outlets, the secretary said President Donald Trump has made clear that international sanctions on North Korea must continue until it takes steps to denuclearize. 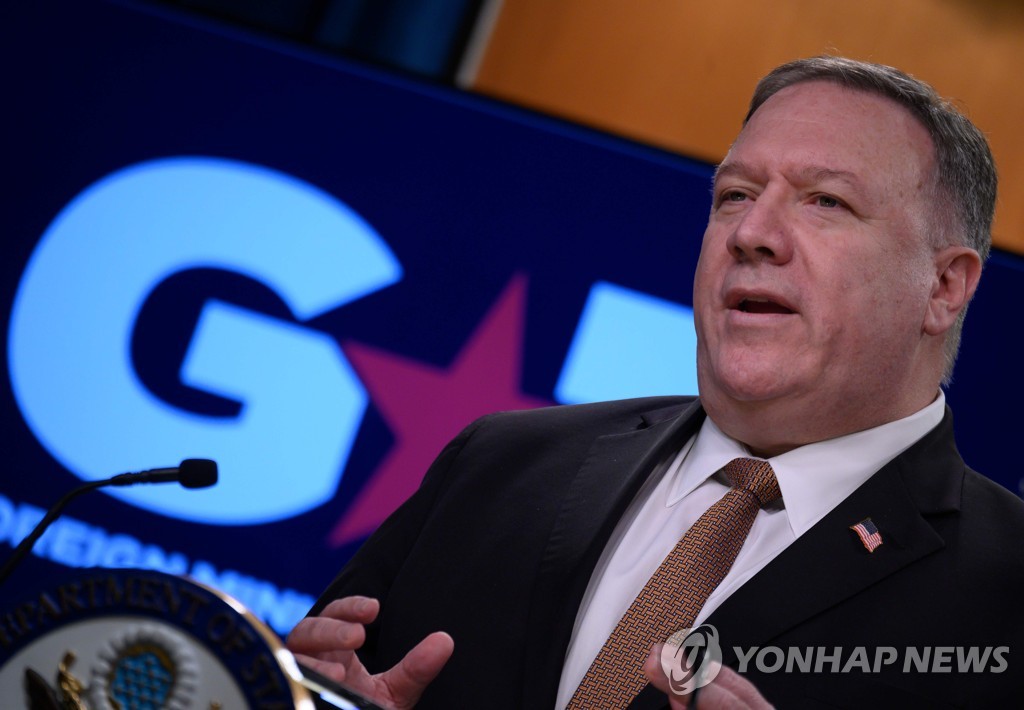 "The president's position on North Korea and mine has been in lockstep since the very first day I became secretary of state," he said, responding to North Korea's complaint that Pompeo was going against the will of Trump, who recently offered assistance with the coronavirus pandemic in a letter to North Korean leader Kim Jong-un.

"We have been trying very diligently from the American side since (the June 2018 Singapore summit between Trump and Kim) to move forward with those negotiations and hope that we will get an opportunity to do that," he added, noting that the leaders agreed at the summit to denuclearize North Korea and create a "brighter future" for the North Korean people.

"President Trump has also been clear, until we get to that point, till we get to the point where we have made sufficient progress along the way, the sanctions -- not American sanctions, but U.N. Security Council resolutions -- will continue to be enforced and in place," he continued.

"And we hope that we will get this opportunity to sit down with the North Korean leadership again and begin to chart a path forward to a brighter future for the North Korean people. It's been President Trump's position since we began our efforts," Pompeo said.

Nuclear talks between the two countries have stalled for more than a year since the second Trump-Kim summit in Vietnam in February 2019 ended without a deal.

The North gave the U.S. until the end of 2019 to show flexibility after Washington rejected Pyongyang's offer to dismantle part of its nuclear program in exchange for large sanctions relief.

As the year passed without a breakthrough, Kim threatened to soon show off a "new strategic weapon" and this month he resumed testing short-range missiles.

But Pompeo said the U.S. stands by its offer to help the communist country fight COVID-19.

"From early on, when it became apparent that the North Koreans were likely to have a challenge, we've offered assistance," he said. "We've done that through the World Food Bank. We've done it directly. And we have assisted other countries and made clear that we would do all that we could to make sure that their humanitarian assistance could get into that country as well."

He said he hopes countries such as North Korea and Iran will be transparent in reporting their COVID-19 caseloads and fatalities, as well as their efforts to reduce the spread, so that an effective global countermeasure can be developed.

North Korea has not reported a single case of the coronavirus, but many suspect the regime may be covering up an outbreak.

North Korean state media has repeatedly reported on the country's efforts to prevent an epidemic by quarantining people and tightening its borders.