Seoul pledged US$250 million in bank loans to Budapest as part of the "economic cooperation" funds totaling $650 million, and agreed to provide half of the loans, or $125 million, before establishing the relations, according to the 240,000-page dossier.

In its annual declassification of 30-year-old diplomatic documents, the foreign ministry released the dossier, shedding light on the then Roh Tae-woo administration's signature "Northern Policy" aimed at opening ties with the then socialist bloc in Eastern Europe and encouraging North Korea to open up and reduce tensions.

The declassified document included the agreed-upon minutes dated Aug. 12, 1988, which detailed Seoul's pledge to provide Budapest with the economic cooperation funds consisting of the bank loans and other financial support, such as $200 million in direct investments.

In line with the agreement, the two countries signed a separate bank loan contract worth $125 million on Dec. 14, 1988, and then established diplomatic relations on Feb. 1 the following year.

According to a report handwritten by the Korean negotiating team, Hungary initially demanded $1.5 billion in economic cooperation funds, while South Korea proposed $400 million. Hungary later pared down its demand to $1 billion and then $800 million before settling for $650 million.

The report noted Seoul's concerns that the funding agreement could trigger similar demands from other countries that it sought to partner with in its Northern Policy initiative. In fact, South Korea offered $450 million in economic cooperation funds when it established ties with Poland in November 1989.

As expected, North Korea responded furiously to the South's diplomatic engagement with Hungary, criticizing the move as an act of betrayal to socialism, recalling its top diplomat in Budapest and downgrading its diplomatic ties with the European country.

The declassified document also showed the botched effort by the Roh government to invite then Japanese Emperor Akihito to improve relations between the two countries long strained due to historical enmity stemming from Tokyo's 1910-45 colonization of the Korean Peninsula.

While preparing for his trip to Japan in June 1989, Roh instructed his aides to consider inviting the Japanese emperor to Korea following his planned visit to Tokyo in 1990. The Japanese side initially showed a positive response to the possibility of the emperor's trip to Korea.

But the pursuit of the emperor's trip fell apart as public calls escalated for Seoul to settle historical issues with Tokyo amid the rightward political shift in Japan. 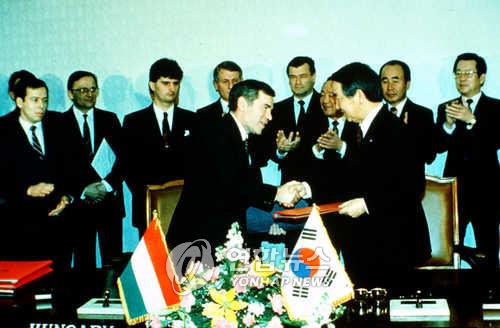