SEOUL, March 31 (Yonhap) -- The U.S. military has transferred prematurely born twins of an American soldier couple stationed in South Korea's coronavirus-hit city of Daegu to a Navy hospital in the United States to provide them with better care even though they were not infected with the coronavirus, an official has said.

The babies were transported from a neonatal intensive care unit in Daegu to Walter Reed National Military Medical Center in Washington via Osan Air Base in Pyeongtaek, some 70 kilometers south of Seoul, aboard a C-17 on Monday, with the assistance of the medical staff from Japan's Kadena Air Base, according to U.S. Forces Korea.

"This is an Air Force critical care team moving an Army family to a Navy hospital, and we are doing it seamlessly in the middle of the pandemic," Camp Humphreys Clinical Services Deputy Commander Col. Joseph Hudak said.

The parents, both members of the 188th Military Police Company, could see the twins only once or twice a week since they were born in a hospital in downtown Daegu in mid-February at the height of the COVID-19 outbreak.

"While our host nation partners have the capability to care for them, and they do an excellent job, coordinating all the care that these infants are gonna need after they're discharged from the hospital and over the next several years of their life is a lot to ask of our host nation partners," Hudak said. "This is a little easier, a little better done if we have the entire family back in the United States."

The newborns and their parents all tested negative for the new virus, he said. The twins have been in the intensive care unit since they were born, and the parents were on quarantine for about three weeks prior to the mission.

"We were able to mitigate risks substantially because of what our host nation partners did to manage this pandemic that we're dealing with as a planet," said Maj. Philip Strawbridge, chief of the medical staff for the 51st Medical Group. 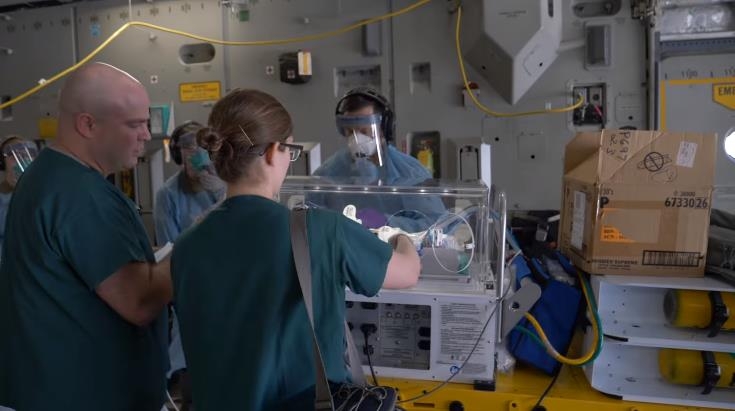