SEOUL, March 31 (Yonhap) -- South Korea hesitated about joining the International Labor Organization (ILO) in the late 1980s when former President Roh Tae-woo was in office over concerns that it could further intensify the labor movement, declassified diplomatic documents showed Tuesday.

In late 1989, the Roh government launched preparations to accede to the ILO at the organization's annual conference the following year. The country had already been sending a delegation to the ILO conference as an observer every year since 1982.

Joining the specialized U.N. body was a key goal for the Roh government that was committed to modernizing the country and elevating its international stature on the back of robust economic growth.

But the government put the bid on hold after realizing that local labor law did not meet ILO standards. The government also worried it could find itself in trouble if the ILO took issue with its refusal to recognize various labor unions, including those representing teachers and public servants, according to the dossier.

It was at a time when South Korea's democratization, through the introduction of a direct presidential election system in 1987, inspired the working class to stand up for its own rights through the staging of massive demonstrations, demanding fair wages and better working conditions. 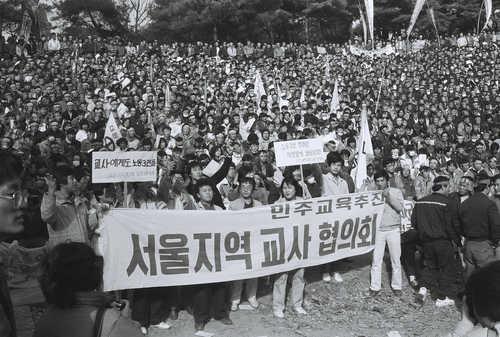 The Roh government worried that joining the ILO would force it to overhaul labor policy and law in compliance with the organization's rules, and that the labor groups would take advantage of the ILO standards.

"We may expect to see frequent cases of labor groups filing for objections, petitions with the ILO, which will then demand a response from the government and recommend the violations be corrected," the document showed.

"The liberal oppositions may try to politically exploit labor and social issues through the ILO. The ILO's involvement in domestic labor issues is a huge burden for politics and economy."

As an "official" explanation for postponing the bid, the government cited the ILO's "strict" membership requirements and that North Korea was expected to actively oppose the South's bid.

South Korea joined the ILO in 1991, when it joined the U.N., along with North Korea. Nearly 30 years have since passed, but the country has yet to ratify four of the eight core ILO conventions concerning freedom of association and guaranteeing the rights to organize a group to defend basic labor rights.

Last year, the government submitted bills to the National Assembly to revise labor law to pave the way for ratification of key ILO conventions. But the bills are still pending at the parliament.