SEOUL, April 1 (Yonhap) -- The global TV market is expected to contract for the first time in three years in 2020 due to the impact of the coronavirus pandemic, a report said Wednesday.

The projection is down from 9.7 percent from an estimate of 225 million units made at the start of the year.

Shipments of OLED TVs, of which LG Electronics Inc. is the world's No. 1 maker, are forecast to grow 17 percent from a year earlier to reach 3.5 million units this year. 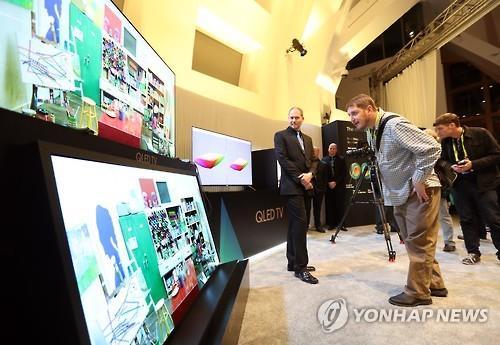 The figure, however, is down from Omdia's earlier projection of 4.5 million units.

Last month, Omdia predicted global TV shipments to fall nearly 5 percent on-year in the first quarter of this year due to Chinese makers' disrupted production caused by the coronavirus outbreak.

Industry watchers warned global TV sales would likely drop sharply in the second quarter as Samsung and LG, the top two industry players in the world, have shuttered their overseas plants in the wake of the COVID-19 pandemic.

Samsung topped the global TV market for the 14th consecutive year in 2019 with a market share of 30.9 percent, followed by its local rival LG Electronics Inc. with 16.3 percent and Japan's Sony Corp. with 9.4 percent.
(END)