About 4,500-5,000 employees were forced to go on unpaid leave starting Wednesday as Seoul and Washington have failed to work out a new Special Measures Agreement (SMA) that covers wages of South Korean employees and other costs of the upkeep of about 28,500 U.S. troops stationed here.

"We express regrets over the furlough, which came as our government has suggested a variety of measures, including the execution of a budget to address the wage issue first, based upon the notion that the furlough does not help the combined defense posture," defense ministry spokesperson Choi Hyun-soo said.

In order to minimize its impact on the livelihoods of the workers, the government will push to enact a special law at an early date and to grant loans, according to the official.

"The ministry will continue to work closely with the U.S. Department of Defense and USFK to prevent the current situation from affecting the joint posture," Choi added. 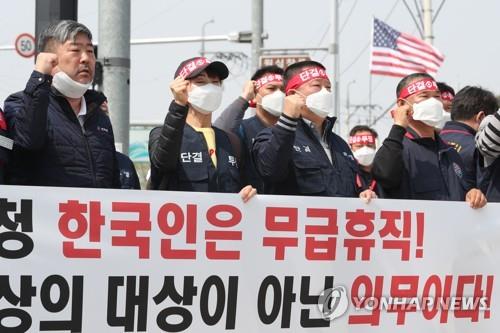