SEOUL, April 1 (Yonhap) -- A son of Chung Tae-soo, the late founder of the now-defunct Hanbo Group, was sentenced to seven years in prison Wednesday for embezzlement, illicit capital flight and violating the foreign exchange law.

The Seoul Central District Court also ordered Chung Han-keun, the fourth son of the late Hanbo founder, to forfeit 40.13 billion won (US$32.6 million) after finding him guilty of the charges.

The sentence came 23 years after the junior Chung allegedly committed the financial crimes during the Asian financial crisis in the late 1990s, and 12 years after he was indicted in 2008 on those charges.

The 55-year-old Chung is accused of embezzling 32 billion won by underreporting that the sale value of a Hanbo company's 9 million shares in a Russian oil company was $25.2 million when it was actually worth $57.9 million in 1997. 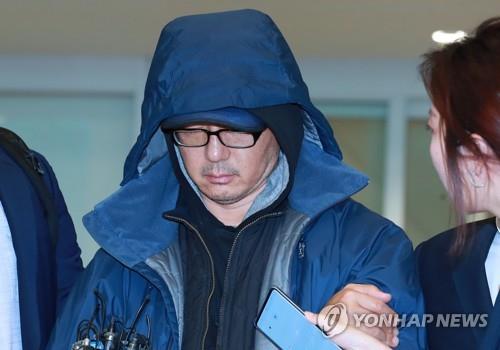 He was also charged with taking the embezzled money out of the country without permission from the authorities, in violation of the Foreign Exchange Control Act. Prosecutors had demanded imprisonment of 12 years and the forfeit of 40.13 billion won for Chung in the previous hearing.

"The accused's act constitutes an illicit capital flight. He has also been found guilty of other charges," the Seoul court said in its ruling.

"The accused committed the crimes for his own profit. He also incited others to help him flee abroad and committed other offenses on the run," the court said.

Chung was arrested in Panama and extradited to South Korea last June, 21 years after he fled abroad in 1998 to avoid a prosecution probe on his criminal charges.

Hanbo Group, once the 14th-largest conglomerate here, declared bankruptcy in January 1997 due to mounting debt.

Hanbo's founder Chung died in December 2018 in Ecuador, where he was living after fleeing South Korea while standing trial on embezzlement charges.