SEOUL, April 1 (Yonhap) -- South Korea called Wednesday for Japan to allow essential visits by businesspeople, the foreign ministry said, as Tokyo was set to tighten entry restrictions to stem the spread of the new coronavirus.

Kim Jung-han, director-general for Asian and Pacific affairs at the ministry, made the call during a videoconference with his Japanese counterpart, Shigeki Takizaki, as Tokyo was set to enforce an entry ban on foreigners from an additional 49 countries and territories, including South Korea and the United States, starting Friday.

"Director-General Kim mentioned the need to strike a balance to enable visits for humanitarian purposes and essential visits by our businesspeople, despite the strengthened anti-infection measures," the ministry said in a press release.

The two sides explained their governments' anti-virus efforts and shared understanding on the importance of their close communication and cooperation in fighting the COVID-19 pandemic.

In the videoconference, Kim also urged Japan to deliver on its earlier pledge to take steps to enable the understanding that many Koreans were brought "against their will and forced to work under harsh conditions" in the 1940s at some of its Meiji-era industrial facilities that were designated in 2015 as UNESCO World Heritage sites.

Kim's request came amid reports that Tokyo opened an information center at those facilities on Tuesday, but did not reveal the forcible mobilization of workers from Korea, during its 1910-45 colonization of the country.

The designated sites include those on the notorious Hashima Island, where many Koreans were forced into labor -- a reason why there was fierce public opposition in South Korea to the designation.

Upon the heritage designation, the World Heritage Committee called for Japan to prepare an interpretive strategy that allows an understanding of the "full history of each site." Tokyo then agreed to take such steps as remembering the victims by establishing an information center. 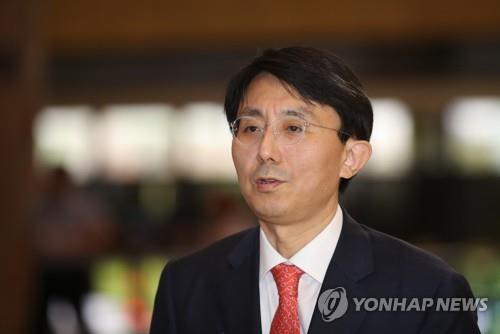