SEOUL, April 2 (Yonhap) -- The government vowed Thursday to take measures to create a safe voting environment for the April 15 general elections, including disinfecting polling stations at home and abroad.

The government also asked for understanding regarding its decision to suspend overseas voting in 51 countries, including the United States and many European countries, due to health risks, movement restrictions and lockdowns over the COVID-19 pandemic.

"It was a decision made considering the impact on the safety and health of our nationals living abroad when they vote in places exposed to high infection risk, and it became difficult to conduct the polls when many foreign governments have enforced executive orders, such as the restriction of movement and lockdowns," said a joint statement issued by the foreign, justice and interior ministers.

"We feel very sorry that our nationals in these countries are unable to exercise their right to vote, and we ask for your understanding."

About 172,000 South Koreans around the world could originally vote overseas, but only about half of them, or 86,000 people, in 66 countries are now able to do so, as overseas voting has been halted in 51 countries.

To ensure a smooth process, South Korean diplomatic missions will work closely with the Korean communities to provide a safe voting environment and assistance until the polls are over, the statement said.

The government also said it will make sure that every voter, including confirmed coronavirus patients, will be able to cast ballots under strict quarantine control, such as by helping patients to vote from home and setting up separate polling stations in public treatment facilities.

Every polling station will be sanitized before and after voting, and there will be a separate polling place for voters who show symptoms.

The government will boost law enforcement during the election period and sternly deal with any suspected cases of illegal campaigning, particularly the spread of online fake news and bribery, it said.

It also called for citizens to take precautions, such as wearing masks when they come to vote and keeping a distance from others while waiting in line. 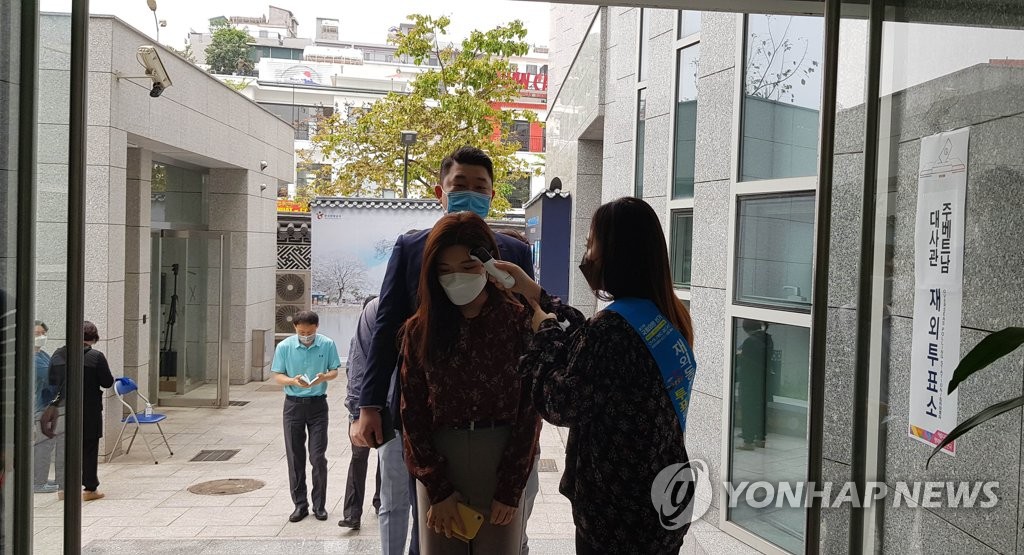