On Thursday, HDC Hyundai Development reiterated its plan to complete the overall process to acquire Asiana Airlines by the end of this month, dismissing speculation that it may have difficulties in taking over the company due to fallout from COVID-19.

"There is no change in our acquisition plan as we said early last month," an HDC spokesman said over the phone.

Speculation has surfaced since late last month when Asiana changed the schedule for its rights issue meant to raise funds, sparking speculation that it may have difficulties in taking over the company due to the fallout from COVID-19. 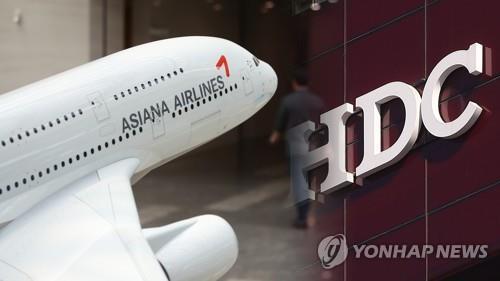 As for the changed schedule, an Asiana spokesman said as China and several other countries have yet to finish reviewing the integration between HDC and Asiana, the payment date has been delayed.

"The countries' review process on whether the integration violates global fair trade rules appears to be taking time due to the spreading coronavirus outbreak. Once they complete their reviews, the date for Asiana's rights issue will be fixed," the spokesman said.

HDC needs to obtain an approval from the countries to which Asiana flies, which is a prerequisite for Asiana's capital increase.

Given this, HDC may not complete its acquisition plan by end-April unless the countries finish the reviews in the coming two weeks, industry officials said.

The HDC-Mirae Asset Daewoo consortium plans to invest a combined 2.18 trillion won in new shares to be issued by Asiana Airlines to help improve the airline's financial status. It said it plans to cut costs by streamlining routes and enhancing cost effectiveness.

After the acquisition, HDC is expected to own a 61.5 percent stake in Asiana Airlines following the planned rights issue, with Mirae Asset Daewoo set to have a 15 percent stake in the country's second-biggest carrier.

In December, the HDC-Mirae consortium signed a deal to acquire a 30.77 percent Asiana stake from Kumho Industrial Co., a construction unit of Kumho Asiana Group, as well as new shares to be issued and the airline's six affiliates, for 2.5 trillion won (US$2.2 billion).

Asiana shares have plunged 37 percent this year through Wednesday and 16 percent this month. As of 10:55 a.m., Asiana had risen 2.2 percent to 3,470 won, outperforming the broader KOSPI's 0.1 percent gain.

Asiana has suspended most of its flights on international routes as an increasing number of countries closed their borders or impose stricter entry restrictions in their fight against COVID-19.

In its latest self-help plans, Asiana said it will have all of its 10,500 employees take unpaid leave for 15 days this month and executives return 60 percent of their wages.