SEOUL, April 2 (Yonhap) -- Eight foreigners were denied entry into South Korea for refusing to comply with the government's mandatory two-week self-isolation on Wednesday, the first day of the enforcement of its reinforced coronavirus-fighting measures, the Ministry of Justice said Thursday.

Under the new quarantine measures that took effect at Tuesday midnight, all entrants from overseas -- both Koreans and foreigners -- are obliged to self-isolate at their residences or government-designated facilities for 14 days.

Those who do not have a place of residence here are charged around 100,000 won (US$82) per day for using public facilities. In addition, all arrivals from abroad must install a mobile app that allows authorities to monitor them in real time and ensure they are following the rules. 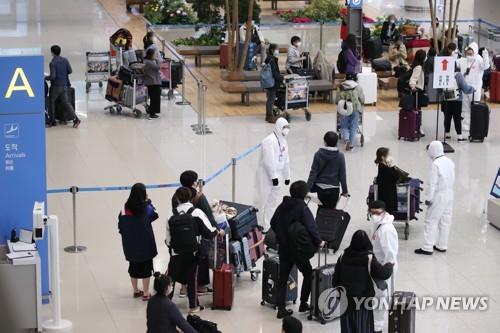 The ministry said the eight foreigners were sent back to their home countries, as they refused to put themselves under self-isolation following their arrival at local airports Wednesday.

The foreigners rejected the mandatory self-isolation, though they were notified of the new rule prior to departing for South Korea, the ministry said, without disclosing their nationalities.

Foreigners refusing to accept the compulsory 14-day self-isolation are not allowed to enter the country under the new quarantine measures. Only foreigners who visit here for national or public interests are exempted from the rules.

Violators of the rules will be fined up to 10 million won or sentenced to up to one year in prison. Foreign violators may also face deportation, and their reentry may be banned.

According to government data, 35 percent of the nation's newly confirmed COVID-19 cases over the past two weeks are from overseas, as an average of less than 10,000 people have arrived here per day since March 22.

South Korea's total confirmed cases rose to 9,976 as of Thursday.