SEOUL, April 2 (Yonhap) -- About 200 South Koreans returned home from Italy on Thursday aboard a second chartered flight that the government arranged to bring its nationals from the European nation hit hard by the coronavirus pandemic.

The Korean Air plane took off from Rome then made a stopover in Milan to pick up 92 people. It landed at Incheon International Airport, west of Seoul, at about 4:30 p.m.

The government arranged the two special flights to airlift citizens stranded in Italy, a country under nationwide lockdown due to the virus spread. As of Thursday, Italy was the country with the second most coronavirus infections, tallying over 110,500 infection cases and more than 13,150 deaths.

The passengers from Italy will be quarantined at designated facilities if any one of them tests positive for the virus. If they all test negative, they will be required to self-isolate at home for two weeks.

Those from the first flight were sent to a quarantine facility in the northeastern city of PyeongChang as one of them has tested positive for COVID-19.

Seoul has so far run government-arranged flights to evacuate citizens from China's Wuhan city, the epicenter of the outbreak, a cruise ship off Japan and from Tehran.

As of Wednesday, the government has helped a total of 4,228 South Korean nationals return home from 31 countries via government-chartered flights or special flights arranged by commercial airlines, according to the foreign ministry.

The government is also in talks with India, New Zealand and a few other countries to help Korean citizens there return home, a ministry official said.

On Thursday, South Korea's infection caseload reached 9,976, with the death toll at 169. Of the confirmed cases, 601, or 6 percent came from abroad, the Korea Centers for Disease Control and Prevention (KCDC) said.

Since Wednesday, all new arrivals have been required to undergo two weeks of self-isolation under the toughened quarantine measures aimed at stemming the rise in imported cases. 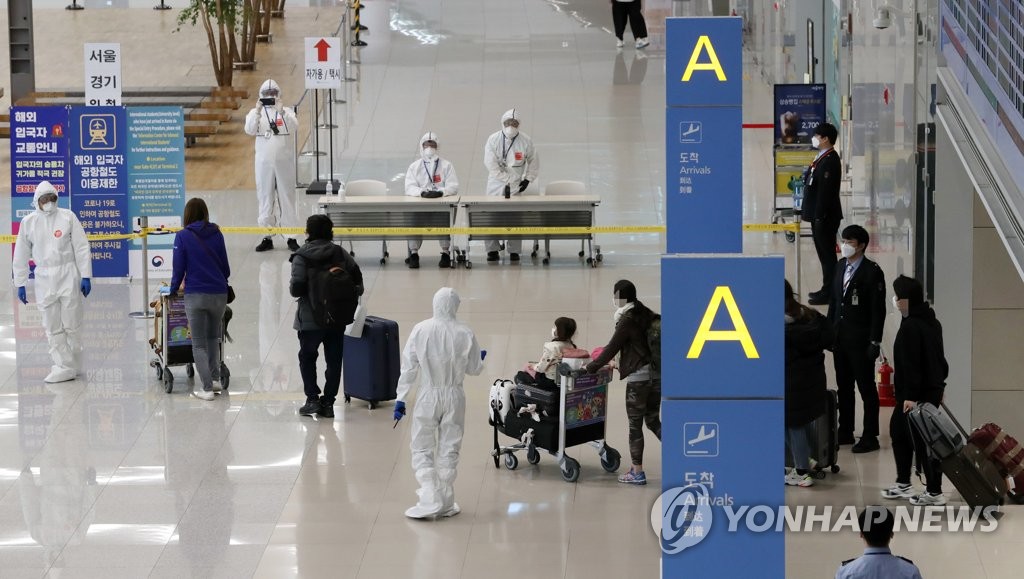