SEOUL, April 3 (Yonhap) -- South Korea's foreign exchange (FX) reserves dropped slightly from a month earlier in March, partly because of the strengthening of the U.S. greenback that reduced the dollar value of reserves held in other currencies, central bank data showed Friday.

The country's FX reserves came to US$400.21 billion at the end of last month, down $8.96 billion from a month earlier, according to the Bank of Korea (BOK).

The BOK said part of its foreign currency holdings may have been used to help stabilize the local market.

"The drop in FX reserves is the result of market stabilization steps and the cut in the dollar-value of foreign assets held in other currencies due to the advance of the U.S. dollar," it said. 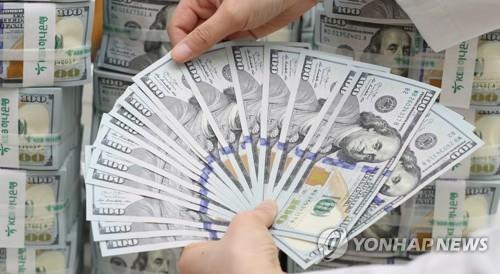 The BOK has signed a $60 billion bilateral currency swap arrangement with the U.S. Federal Reserve. It delivered $8.7 billion to local lenders this week, using its currency swap line with the United States.

In March, South Korea's FX reserves in foreign securities came to $357.6 billion, down $13.62 billion from a month before.

Its foreign savings gained $4.62 billion to $31.72 billion over the cited period, while its special drawing rights gained $40 million to $3.32 billion.

Foreign exchange reserves include the International Monetary Fund reserve position and gold bullion, which remained nearly unchanged from the previous month at $2.78 billion and $4.79 billion, respectively, as of end-March.