SEOUL, April 2 (Yonhap) -- Roman Catholic churches in Seoul and temples of the country's biggest Buddhist sect will further suspend their public services, at least till mid-April, as part of national efforts to contain the spread of COVID-19.

The Catholic Church's Seoul archdiocese said in a press release on Thursday that all weekly public Masses will remain on hold until future notice.

"On Tuesday, the government announced that it will put school openings on indefinite hold while starting the new school year through online classes," the Seoul archdiocese said.

"In accordance with this, the diocese made the latest decision (to further suspend public Masses) in its ad hoc presbyteral council meeting held Wednesday," according to the Seoul archdiocese.

The Seoul archdiocese initially put its public Masses on hold on Feb. 25 as the country's confirmed cases surged especially among religious groups.

The government has since repeatedly called on religious groups to stop public services as part of its strict social distancing campaign.

The church had planned to resume the Masses, starting on April 6, but the latest decision will further put them on suspension.

The Jogye Order of Korean Buddhism also announced that all its public services will be further postponed till April 19.

"We take it seriously that the COVID-19 pandemic originated from our own lifestyle in which we threatened other living things for the sake of the interest of mankind, isolated ourselves from neighbors due to personal greed and impaired the immaculacy of the community," the Jogye Order said in a press release.

South Korea is on a continuing social distancing campaign as the country's confirmed COVID-19 cases grew to 9,976 as of Thursday, up 89 from a day earlier. 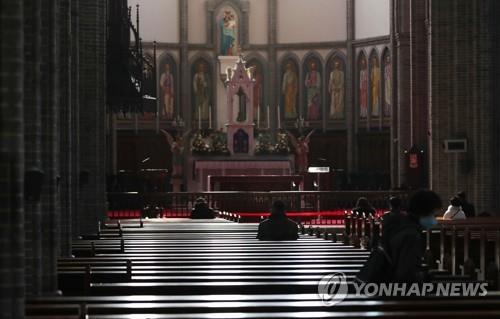