In a weekly standing committee session of the National Security Council (NSC), the officials reviewed progress in the negotiations on the Special Measures Agreement (SMA) between the allies.

They "agreed to continue efforts to strike a deal at an early date," Cheong Wa Dae said in spite of multiple news reports that Seoul and Washington have tentatively reached an accord.

On Wednesday, Cheong Wa Dae said the two sides have narrowed differences but the bargaining is still going on.

The NSC officials also had discussions on ways for South Korea to make "specific contributions" to the global fight against COVID-19, as many countries are calling for the sharing of the country's quarantine knowhow and supply of its medical products.

In particular, they decided to strengthen international coordination to follow up on a joint statement issued at the Group of 20 teleconference last week. The NSC session was presided over by Chung Eui-yong, director of Cheong Wa Dae's national security office. 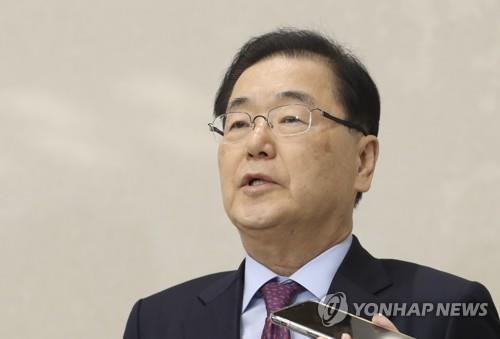 NSC to strive for defense cost-sharing deal with U.S.

NSC to strive for defense cost-sharing deal with U.S.