SEOUL, April 2 (Yonhap) -- South Korea and the United States have yet to reach a defense cost-sharing agreement despite continued "high-level" consultations, the foreign ministry said Thursday.

The ministry issued the statement amid a flurry of reports that Seoul and Washington had tentatively reached a deal on Seoul's share of the cost for stationing the 28,500-strong U.S. Forces Korea (USFK).

"Although there have also been continued consultations at the high level regarding the defense cost-sharing negotiations, an agreement has yet to be reached," the ministry said in a text message sent to reporters.

"We will continue consultations so that the negotiations can be concluded at an early date," the ministry added.

Some observers said that the negotiators from the two countries might be waiting for U.S. President Donald Trump's final approval after they reached a tentative deal.

Later in the day, USFK Commander Gen. Robert Abrams retweeted a photo describing the Korean idiom "to drink kimchi broth. He explained that the expression carries the same meaning as "to count one's chickens before they hatch."

Seoul and Washington have been under pressure to quickly reach a new defense cost deal, known as Special Measures Agreement (SMA), as about 4,000 Korean workers employed by the USFK were forced to go on unpaid leave, starting Wednesday, in the absence of a deal to fund their wages.

A day before the furloughs, Seoul's top negotiator, Jeong Eun-bo, said that the two sides have "considerably" narrowed their differences in the SMA talks, and voiced expectation for the conclusion of the negotiations in the near future.

Last year's SMA, which called for Seoul to pay about US$870 million, expired at the end of December, leaving the USFK with little wherewithal to bankroll wages for the Korean employees.

Since September last year, Jeong and his U.S. counterpart, James DeHart, have held seven rounds of official negotiations, including the latest in Los Angeles last month.

The U.S. initially called for a fivefold increase to around $5 billion but later revised downward its demand amid criticism that it was focusing more on financial benefits of the alliance than on strategic interests for regional stability. 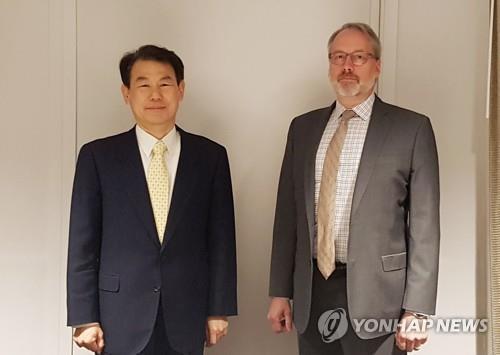