SEOUL, April 3 (Yonhap) -- President Moon Jae-in assured Jeju residents Friday that his administration would make every possible effort to legislate compensation for the victims and bereaved families of the April 3 massacre there seven decades ago.

He was addressing an annual ceremony to commemorate the tragic incident, during which tens of thousands of civilians were killed by the authorities in a yearslong bloody crackdown on the southern island. They were protesting against U.S. military-led rule following Korea's liberation from the 1910-1945 colonial rule of Japan. The authorities labeled them as pro-communist forces amid a sharp ideological divide at that time.

"A revision bill on the April 3 Incident, meant to serve as a basis for a complete resolution, is still pending at the National Assembly," he pointed out in his televised speech.

The government will "continue efforts for substantive compensation to be realized as basic justice," he added. 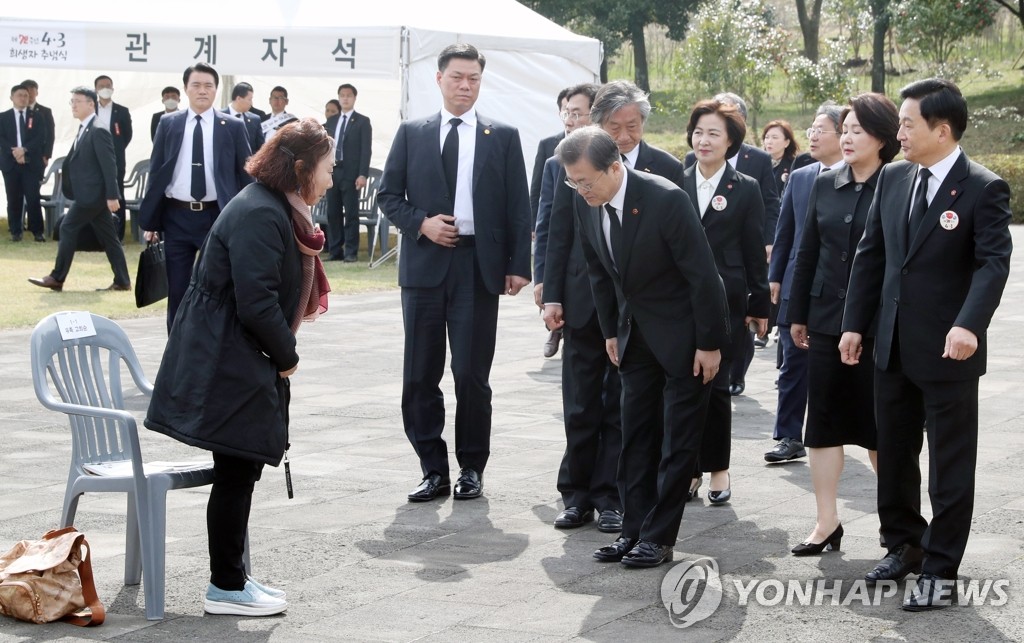 The president urged lawmakers and politicians to pay "special heed" and provide support with regard to the matter.

"Along with efforts for the legislation, the government will swiftly do what it can," he added.

The revision bill, submitted in late 2017, calls for reparations for the victims and their families, the recovery of their honor and additional investigation into the truth behind the incident.

Moon noted that this year's anniversary came as South Koreans are going through a "very grave and tough period" in the face of the coronavirus outbreak.

The power of "solidarity and cooperation" has made them stronger in the crisis, he said.

"Resolving the April 3 Incident is not a matter of politics and ideology at all," he said. "It's a matter of common sense and a humane attitude sympathizing with the pain of neighbors and respecting people."

The government, meanwhile, scaled down the official ceremony at the Jeju April 3 Peace Park in consideration of quarantine measures.

Moon joined it in 2018. Last year, then-Prime Minister Lee Nak-yon was present at it on behalf of Moon.