On Thursday evening, Abrams retweeted a dictionary explanation of the traditional Korean idiom "to drink kimchi broth," saying he had just learned the expression "Don't eat your kimchi stew before the time is right," which means "Don't count your chickens before they hatch."

The tweet came after widespread speculation here that Seoul and Washington had reached a tentative agreement in their defense cost negotiations and a deal could be announced this week, which would allow thousands of furloughed South Korean USFK employees to return to work.

U.S. officials in Washington denied South Korean media reports on an impending deal, saying negotiations are ongoing and that President Donald Trump has been clear that, "Our allies around the world, including South Korea, can and should contribute more."

The idiom usually goes, "Don't eat kimchi broth, as the one with rice cakes doesn't even think of giving you a piece."

Critics said the tweet did not come at the right time.

"It is quite inappropriate for the top military leader to say that at a time when thousands of his people are worried about their daily lives," read a comment posted on a related article by a Korean media outlet Friday, referring to 4,000-5,000 Korean workers put on indefinite furloughs Wednesday.

"I feel like, my hope for a swift conclusion of the deal was dashed when I saw this Twitter post. It is just heartbreaking, though false hope does not do good to anyone," a Korean worker on unpaid leave said.

A government official said Abrams might have failed to recognize the nuance of the expression or might have been sending a message to the media.

USFK later said the commander did not have the negotiations in mind when tweeting the idiom, saying Abrams learns new Korean phrases and metaphors weekly for use during meetings, interactions and conversations with Korean officials.

"His tweet was an innocent one, especially because he appreciates the Korean culture and enjoys Kimchi, and should not be taken for any other meaning," his office said in a statement.

In a message to the furloughed workers Wednesday, Abrams said he regarded them as family, and that the situation is "unfortunate" and "heartbreaking." He vowed to support the workers while doing his part for a deal to end their unpaid leave. 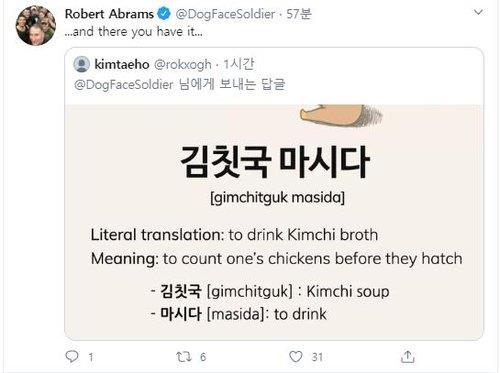