The seven, including one surnamed Kwon, were accused of displaying placards condemning Japan's export curbs for South Korea and shouting slogans, such as "Abe must apologize," on the premises of the Japanese mission on July 22. Earlier that month, Tokyo began applying its export curbs on South Korea for three key materials needed for the production of chips and displays in an apparent response to Seoul's handling of a wartime forced labor issue.

The seven students were all indicted without detention in January on trespassing charges. 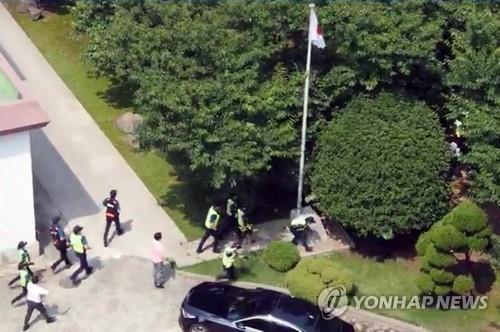 The Busan District Court on Thursday ordered the seven students to pay a fine of 3 million won (US$2,440) but deferred the imposition of the sentence.

A deferred sentence refers to a postponed or delayed sentence in which criminal charges are dismissed and conviction is avoided after two years. It differs from a suspended sentence that follows criminal conviction.

"The public has also sympathized with the actions of the accused. But they violated procedures and their methods (of protest) were done in a backward way. Thus their will can be distorted," Judge Bu Dong-sik said.

"It is hoped that the accused will learn the importance of the process through this opportunity. Their status as university students preparing to enter into society has also been taken into consideration in determining their sentence," the judge said.

The university students had argued in previous court hearings that they only took righteous actions as young Korean men.