SEOUL, April 3 (Yonhap) -- A Seoul court on Friday issued an arrest warrant for a former public service worker for allegedly making illegal inquiries into personal information of hundreds of people and leaking that information to the leader of a high-profile digital sexual exploitation ring.

The Seoul Central District Court approved the prosecution's request to arrest the former public service worker identified only as 26-year-old Choi, saying there is probable cause to detain him for violating the Personal Information Protection Act. 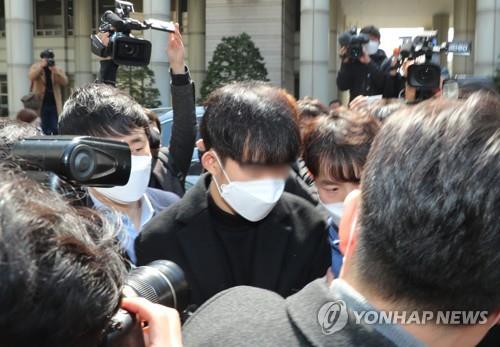 Choi is accused of illegally inspecting the personal information of about 200 people and delivering information on about 17 of them to Cho Ju-bin, the operator of a pay-to-view online chat room of a sexual nature, while serving as a public service worker at a community center in Seoul.

Cho, a 25-year-old, has been detained for allegedly blackmailing girls into sharing sexual videos, which were then posted in his illegal chat room, dubbed "Baksabang," meaning a doctor's room, on the Telegram messenger service.

Choi allegedly committed the crimes while performing an alternative military service as a social service agent at a Seoul community center, where he worked as an assistant in the issuance of resident registration certificates.

In South Korea, all able-bodied men are obliged to serve in the military or carry out alternative public services for about two years.

According to police, Choi has already been released from his public service duty and is no longer working at the community center. Police said Choi and Cho had known each other before the latter opened the Baksabang chat room last year.

A special investigation team of the National Police Agency, expanding its probe into Baksabang and other illicit Telegram chat rooms and their paid members, said that it has detained two of Cho's three accomplices and is now questioning an Army soldier as another suspect.

The three accomplices are suspected of having jointly managed Baksabang, along with Cho. Police have also obtained the nicknames of about 15,000 paid members of Baksabang from digital data secured from Cho and are now tracking down their personal identity information.