SEOUL, April 4 (Yonhap) -- President Moon Jae-in called Saturday for religious groups to comply with the extended nationwide social distancing drive by avoiding face-to-face worship services so as to stem the spread of the new coronavirus.

The government announced earlier in the day the continuation of the aggressive social distancing campaign for another two weeks, until April 19, amid few signs of the virus outbreak letting up.

"We are at a critical juncture with the new coronavirus outbreak, either going into stable condition or spreading again. We earnestly ask you to join us in social distancing by holding online worship services and family worship at this time," Moon said in a Facebook post.

Health authorities have particularly warned against mass gatherings, which can easily cause a cluster infection, as in the cases of a minor religious sect in the southern city of Daegu and of a few other churches.

Moon cited cluster infections as a key factor that prevents the overall curve from moving downwards, saying that religious gatherings are susceptible to a cluster outbreak.

"The reason why the number of newly confirmed patients dropped one day and went up again the next is because there was a cluster infection at that time," he said.

To overcome the pandemic, Moon reinforced the call to take part in the social distancing drive.

"We must stop the cluster infection at all costs. If the same things keep happening again, not only the medical personnel but the whole country will be exhausted."

He expressed thanks to major Catholic and Buddhist communities, such as the Jogye Order of the Korean Buddhism and the Roman Catholic Archdiocese of Seoul, for suspending all worship services. He also thanked many Protestant churches for their decisions to hold their Easter services online. 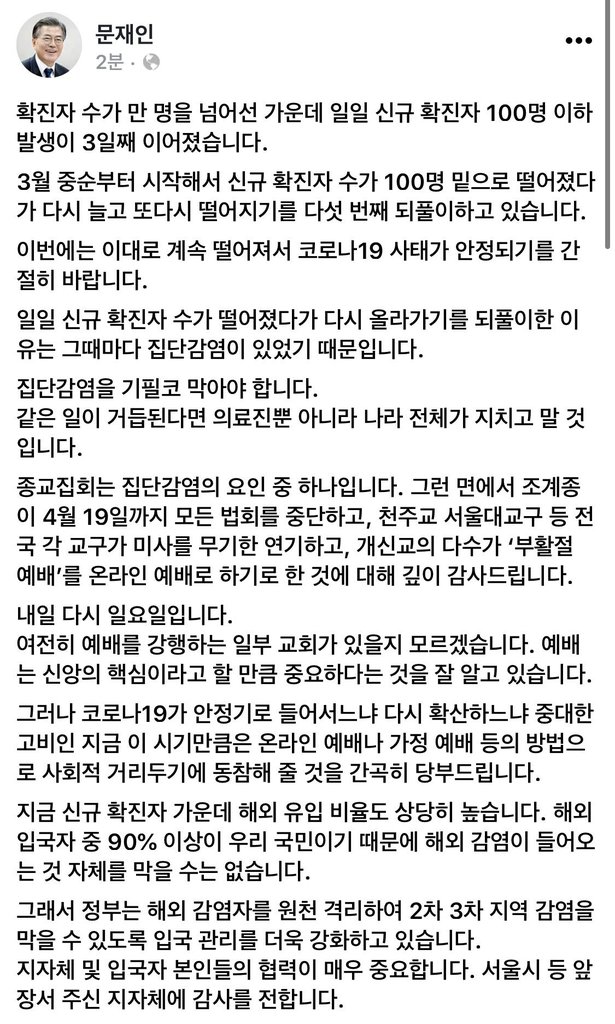