SEOUL, April 6 (Yonhap) -- The ruling Democratic Party (DP) and the government have agreed to push for abolishing the statute of limitations for sex crime involving children and minors.

At least 103 people, including 26 underage girls, are known to have been exploited in the Nth room case, in which the arrested prime suspect, Cho Ju-bin, allegedly lured victims into taking photos and later coerced them into performing more gruesome sex acts.

"In case of sex crimes involving children and minors, we will push to set the minimum years of sentencing and abolish the statute of limitations," the DP and the government said in a statement.

"We will also actively consider raising the statutory ceiling of punishment and in case of reoffenders, we will mull introducing aggravated punishment and abolishing the cap of sentencing," it showed.

Public criticism at relatively light punishment for criminals of child sex abuses has mounted in South Korea following the revelation of the Nth room case.

Under law, those who produce obscene materials involving children and youths can face life imprisonment and a jail term of a minimum of five years. Those who sell and distribute child pornography for the purpose of profit-making can face a prison term of up to 10 years.

The participants in the meeting said they will seek to revise criminal codes and laws on sex crime, telecommunications and the protection of youth from sex crime in a bid to prevent the reoccurrence of the Nth room case.

"The government will conduct thorough investigations into those involved in the case so that they will face heavy punishment and authorities can retrieve profits that they had earned via crime," Vice Justice Minister Kim O-su said.

"In a bid to protect victims, we will search and delete videos that were illegally filmed and distributed," he noted. "The government will make efforts to provide them with all available legal and economic assistance." 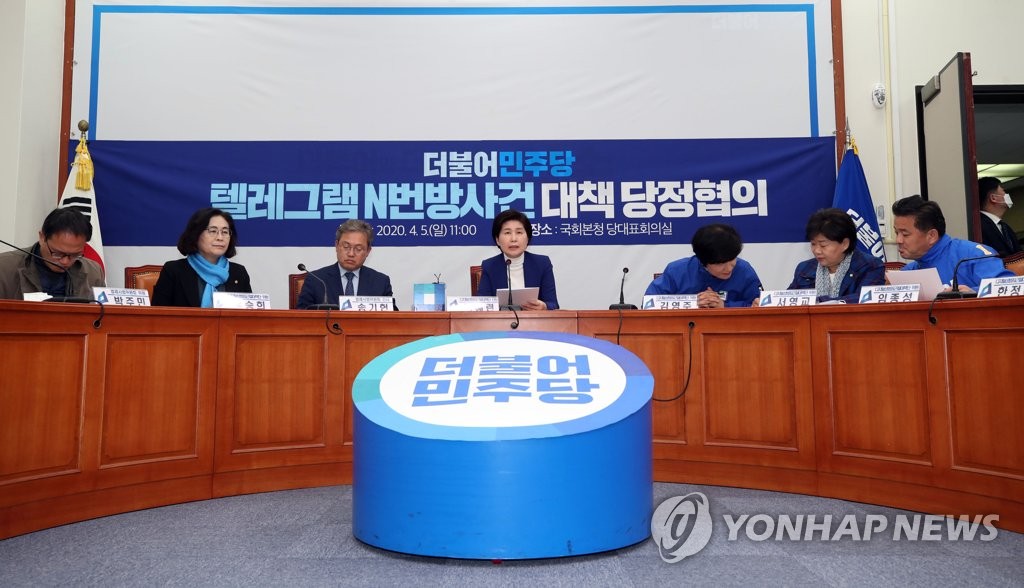