SEOUL, April 6 (Yonhap) -- More South Korean people dined out and visited outlets and parks over the weekend, although the country has been preaching a strict social distancing campaign to curb the outbreak of the new coronavirus, data showed on Monday.

According to mobile big data collected by health authorities, people's movement rose by 20 percent over the weekend compared to late February, despite new cases cropping up across the country.

South Korea initially kicked off its two-week-long strong social distancing drive on March 22, but decided to maintain it up till April 19 as the number of new COVID-19 cases has not gone down.

"There has been a weakening of social distancing practices as people are showing signs of fatigue over the restrictions," Vice Health Minister Kim Ganglip said during a press conference. A large number of people gathered in parks and commercial districts over the weekend, he said. 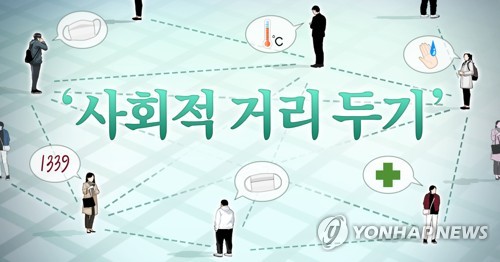 During the fourth week of February, when the country reported a sharp increase in its daily new cases, people's movement dipped 38 percent compared to prior to the country's first outbreak of the novel coronavirus.

Kim said that if more people had joined the social distancing effort, South Korea may have been able to better contain the spread of the highly infectious respiratory disease.

The vice minister said while it may be hard for people to stay at home, the public must realize that it is far too early to be complacent.

As of Sunday, the country reported 47 additional cases of infections, with the total hitting 10,284 people. Since January, the country has tested 466,804 people for the novel virus, with 6,598 people making full recoveries. The death toll has reached 186 so far.