SEOUL, April 6 (Yonhap) -- President Moon Jae-in asked South Korea's major banks Monday to be aggressive in efforts to help the country's businesses hit by the coronavirus, saying the government won't take issue with unintended, minor mistakes, if any, in the emergency aid process.

Speaking at his unprecedented group meeting with the heads of leading commercial banks and policy leaders here, the president emphasized the importance of the "role of finance" in riding out the burgeoning crisis.

He likened financing with medical workers in anti-virus quarantine.

"Just as the dedication of medical workers save patients, aggressive financing can rescue companies, small business owners and the self-employed," he said during the session held at the Korea Federation of Banks headquarters in central Seoul.

He added protecting firms is the way to insulate jobs and people's livelihoods. 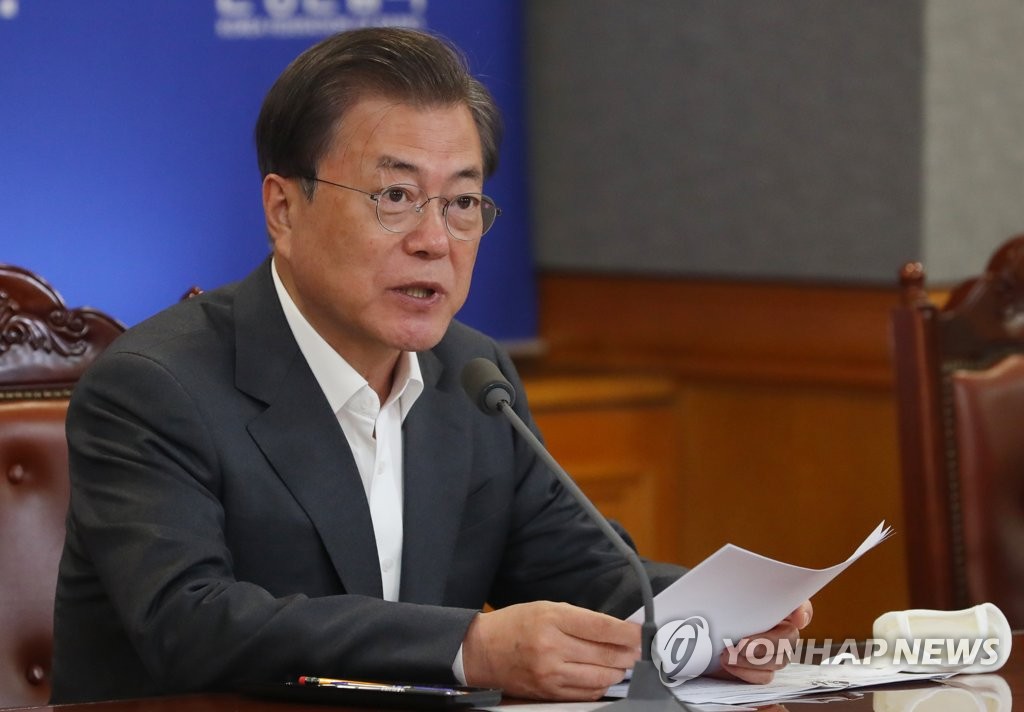 Moon thanked the financial institutions for having cooperated with his administration's push for an emergency aid package, worth 100 trillion won (US$81 billion), for the local business sector against the economic fallout of the COVID-19 pandemic. The relief program was announced last month at emergency economic council meetings presided over by Moon.

It couldn't have been crafted without the backing of the financial circles, he said.

The president stressed it's important to turn the scheme into action in a timely and appropriate manner, saying continued support is required for the provision of "adequate funds" to businesses against a possible liquidity crunch.

Depending on situations down the road, "We may need additional measures," Moon said.

There may be "unintended negligence in the process of providing (relevant) funds," he added. "Without any particular intentionality, the government or financial authorities won't hold (financial institutions) responsible. I clearly promise this."

He called off his weekly meeting with senior Cheong Wa Dae aides for the roundtable session with the chief executives of the country's five main banks -- Shinhan, KB Kookmin, Woori, KEB Hana and NH Nonghyup.

Also attending it were the chiefs of the Korea Development Bank, Export-Import Bank, the Industrial Bank of Korea, the Korea Credit Guarantee Fund and the Korea Technology Finance Corp.