SEOUL, April 6 (Yonhap) -- Eastar Jet Co., a South Korean low-cost carrier, said Monday it will cut one-fifth of its workforce as it strives to stay afloat amid the growing impact of the coronavirus on the airline industry, but the proposed layoffs are smaller than originally thought.

The planned job cut at Eastar raises concerns over the possibility of industrywide restructuring.

The airline originally planned to cut some 750 employees out of its total 1,680-person workforce. Eastar Jet said it also plans to return 10 out of 23 B737-800 aircraft to leasing companies.

The move comes after state-run Korea Development Bank (KDB) rejected Eastar Jet's request for a fresh loan due to lack of collateral and the carrier's low credit ratings.

Eastar Jet held 7.7 billion won (US$6.2 million) in cash reserves at the end of last year and held debts worth nearly 40 billion won. 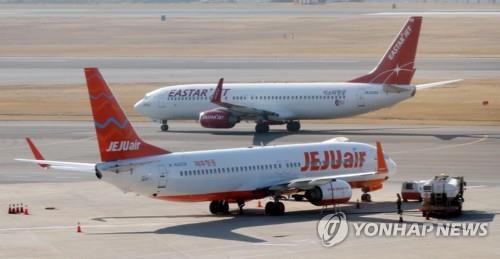 Eastar Jet's planes will be grounded from March 24 through April 25 as an increasing number of countries closed their borders or imposed stricter entry restrictions in their fight against the new coronavirus.

Eastar Jet may end up in bankruptcy if Jeju Air Co.'s planned acquisition of the financially troubled budget carrier takes time to obtain government approval and Jeju Air fails to inject cash into Eastar Jet in the right time.

Last month, the country's leading budget carrier Jeju Air signed a deal to acquire a 51.17 percent stake in Eastar Jet from Eastar Holdings for 54.5 billion won as part of its expansion strategy.

South Korea's anti-trust regulator has yet to approve the integration of the two budget carriers.

Other airlines have also been struggling with worsening business environments due to the spreading COVID-19 outbreak across the world.

Air Seoul Inc. has posted net losses since its establishment in 2015, and Air Busan Co. shifted to a net loss last year after posting a net profit from 2010-2018. The two firms are budget carrier units of Asiana Airlines Inc., the country's second-biggest airline after Korean Air Lines Co.

Korean Air and Asiana have suspended most of their flights on international routes, and all the budget carriers have grounded their fleets to minimize the impact of the virus outbreak.

Eastar Jet to cut 20 pct of workforce on virus impact

Eastar Jet to cut 20 pct of workforce on virus impact