SEOUL, April 6 (Yonhap) -- The head of the United Nations health agency on Monday asked South Korean President Moon Jae-in to come to the fore in the global war against the coronavirus so that other countries can follow in his country's footsteps, Cheong Wa Dae said.

He requested that Moon endeavor to encourage global leaders to learn from South Korea's method, according to Cheong Wa Dae spokesman Kang Min-seok.

The WHO leader made a "special suggestion" that Moon pay keen attention to the issue of providing sub-Saharan African nations with test kits and other medical devices.

He also invited Moon to deliver a keynote speech at the World Health Assembly to be held via videoconferencing in May.

"It would serve as a good opportunity to share South Korea's experience in connection with COVID-19," he was quoted as saying. German Chancellor Angela Merkel and South African President Cyril Ramaphosa are among those who plan to address the session. 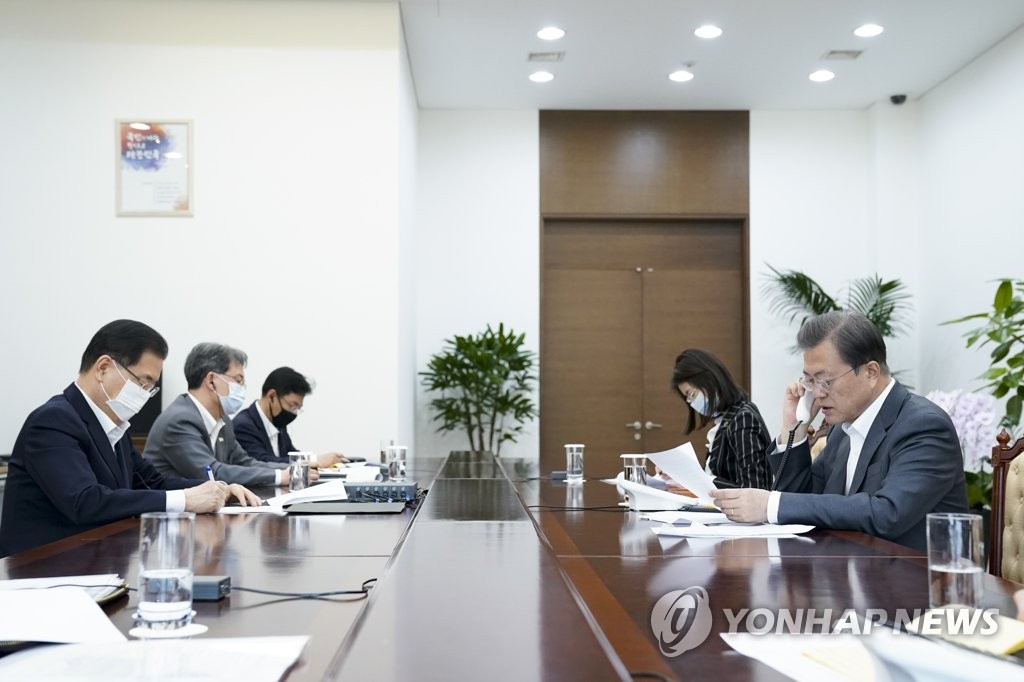 Moon proposed having consultations on details, through the diplomatic channel, including Foreign Minister Kang Kyung-wha.

He then reminded the WHO official of South Korea's measures based on the organization's relevant guidelines.

"Our government is coping with COVID-19 constantly in accordance with the three major principles of openness, transparency and democracy," the president said, adding his nation has minimized "unnecessary" restrictions on the movement of people and goods, as the WHO has advised.

Moon also said his administration plans to make contributions to coronavirus response programs led not just by the WHO alone but also the United Nations. The WHO raised a total of US$677 million in related funds as of April 1.

Moon said he has already had phone conversations with around 20 foreign heads of state on the pandemic.

He reaffirmed a commitment to providing all available support for their countries.

The president pointed out the WHO's role has become more important amid the "unprecedented global health care crisis" and held out expectations that it will play a leading role in defeating the virus.

Their 25-minute-long phone talks were made at the WHO leader's request, Kang said.

WHO chief requests Moon's role in global fight against coronavirus

WHO chief requests Moon's role in global fight against coronavirus