SEOUL, April 7 (Yonhap) -- Small businesses and local governments in South Korea are testing out creative ideas as they seek to overcome a slump stemming from the new coronavirus that has infected more than 10,000 here.

In the southern cities of Gimhae and Seosan, farmers have set up drive-thru markets to sell vegetables and fruit, taking a cue from the government's successful drive-thru virus screening centers.

A package of 11 kinds of vegetables is being sold for 20,000 won (US$16) and a kilogram of garlic costs 10,000 won, according to the organizers. Everything sold out in the three rounds of the event held since late February.

Fishermen in Pohang, a port city 374 kilometers southeast of Seoul, also opened a drive-thru market. A 20,000-won lunch box filled with 1 kilogram of starry flounder, salad and a small packet of red chili pepper paste with vinegar sold out quickly. 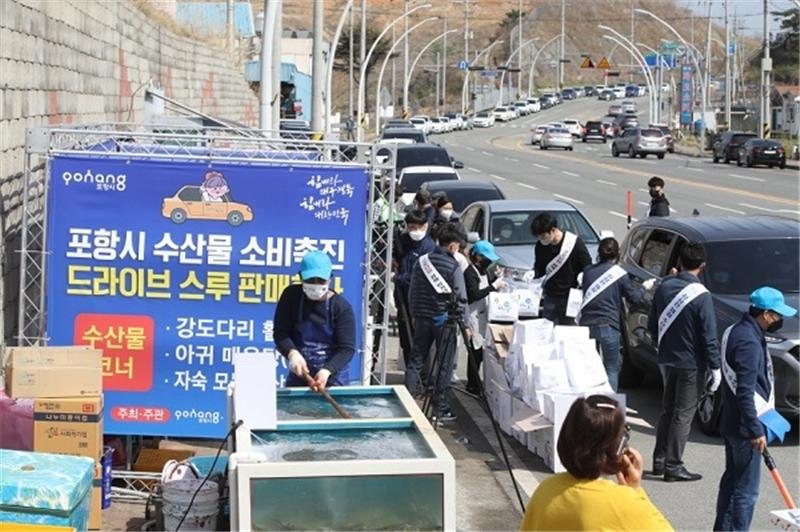 February and March are usually the peak season here, with demand surging in line with graduation and entrance ceremonies, but sales have plummeted, as most events have been called off or replaced with streamed ceremonies.

Celebrities, such as comedian Kim Sook and chef Lee Won-il, have taken part, using the hashtags #Saveflowerfarmers, #Flowerhaspower and #KoreaFighting, with the last hashtag referring to the Korean expression for "cheer up."

Local governments are also helping to drive demand by encouraging employees and residents to eat at restaurants.

The western Seoul ward of Yangcheon is running a social media challenge that encourages employees to prepay 30,000 won at their favorite restaurants. If residents bring receipts after spending more than 100,000 won at local restaurants, the ward office rewards them with hand sanitizers and masks.

Suyeong-gu in the port city of Busan is running a similar campaign. It gives out masks for every 20,000 won spent at a local restaurant. Those with a receipt of minimum 20,000 won receive one mask, while those who spend 40,000 won get two masks and so on.