SEOUL, April 8 (Yonhap) -- South Korea's prime minister said Wednesday he supports the proposed provision of emergency relief funds over the new coronavirus to the entire population if retrieving the money from high-income earners later is set as a precondition.

Prime Minister Chung Sye-kyun was expressing his personal views on the universal payment, in response to politicians' proposal of expanding the scope of recipients for the funds to the nation's 51 million people.

In a one-off stimulus program, South Korea plans to offer 1 million won (US$812) to four-person households in the bottom 70 percent income bracket. About 14 million households comprising 35 million people are expected to receive aid worth 9.1 trillion won in total.

"I think the universal payment is possible if there are preconditions under which authorities will retrieve the funds from high-income earners," Chung said at a press conference in the administrative city of Sejong.

Political parties have proposed that the funds be granted to the entire population in an apparent bid to win more votes in next week's parliamentary elections.

The ruling Democratic Party (DP) has called for offering 1 million won to four-person households. The main opposition United Future Party has argued for the payment of 500,000 won per person.

The presidential office Cheong Wa Dae said Tuesday the government remains committed to its decision on the bottom 70 percent income bracket. But it also did not rule out flexibility, saying it is up to the National Assembly.

Chung said South Korea will walk on the "unprecedented" path as it will begin the new semester Thursday with online classes for middle and high school seniors.

After repeated delays, the new school year will begin Thursday, depending on grades.
"Remote classes will help teachers, students and people overcome the digital divide. The government took the courage to open the semester with online classes, hoping the move will upgrade digitalization in the country," he added. 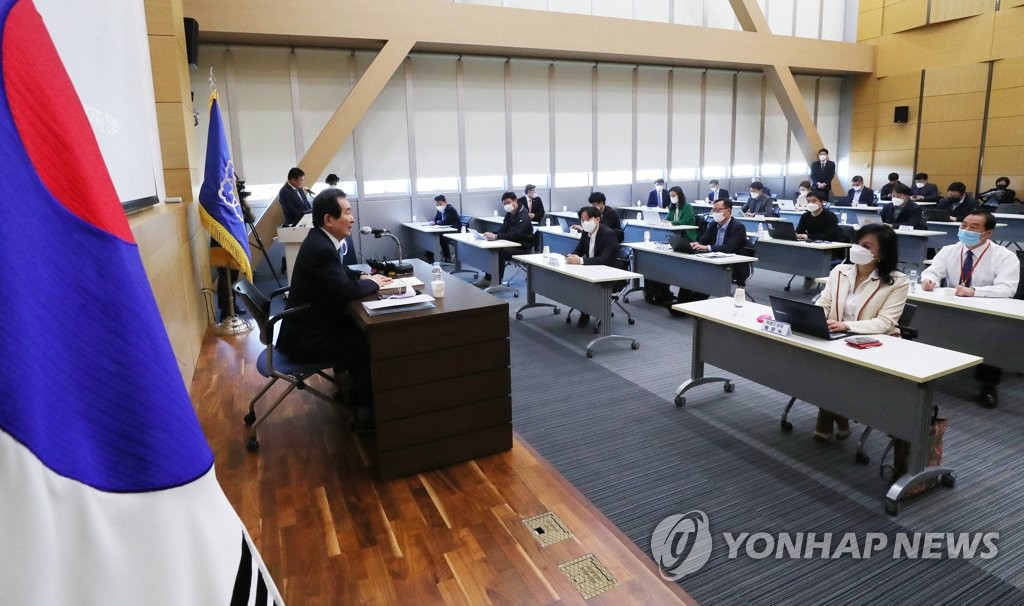