SEOUL, April 8 (Yonhap) -- South Korea's two leading duty free operators have decided to give up their bids to operate stores at Incheon International Airport as the novel coronavirus has devastated business at the transportation hub, industry sources said Wednesday.

The move by Hotel Lotte and Hotel Shilla comes as the business environment at South Korea's main airport has changed dramatically due to the COVID-19 pandemic, insiders said.

The two companies should have signed new 10-year lease deals with Incheon International Airport Corp. (IIAC) by Wednesday, but failed to do so. 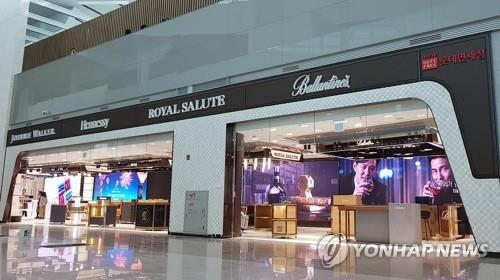 In January, Hotel Shilla was named as the primary negotiation partner for DF3 sector in Terminal 1, while Hotel Lotte secured the preferential right to run stores in the DF4 sector. Lotte and Shilla are South Korea's first and second largest duty free operators and have maintained a strong presence at the airport for years, with DF3 and DF4 being areas for sales of alcoholic beverages and tobacco products that are in high demand by travelers.

Industry sources said that the airport had asked for a minimum 63.8 billion won (US$52.3 million) for DF4 sector in the first year of business when it took bids in early 2020, with the sum for DF3 set at 69.7 billion won.

Both Lotte and Shilla are known to have asked for a renegotiation on the bidding price, although this request was rejected.

The airport, located west of Seoul, serviced an average of 200,000 passengers daily before the coronavirus pandemic. Those numbers have nosedived and currently stand at less than 2,000.

Despite the two companies opting out of the bid, Hyundai Department Store, which took part in the auction, inked a deal for DF7 sector at the passenger terminal.

The latest development, means that IIAC will have to open bids for four duty free sectors going forward as deals for DF2 and DF6 fell through in February.
(END)