Tomita made the remarks in an interview with Yonhap News Agency on Wednesday as South Korea has stepped up diplomatic efforts to encourage countries to allow essential trips by entrepreneurs to mitigate the economic repercussions of the COVID-19 pandemic.

"The top priority of each country is to stop the infectious disease from spreading and becoming serious. I think an easing of entry restrictions in any form would lead to various confusions," Tomita said.

"We should consider the part proposed by the South Korean government while monitoring developments regarding the spread of infections," he added. 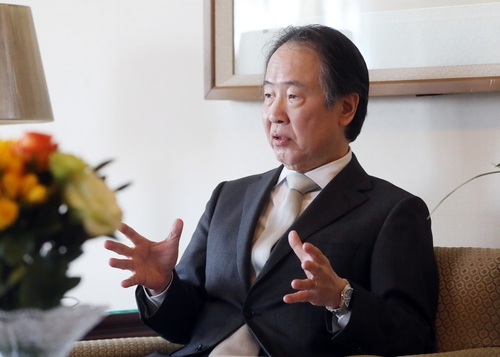 Last Friday, Japan imposed an entry ban on entrants from the whole of South Korea and dozens of other countries, amid an increase in new COVID-19 cases that led to the postponement of the Tokyo Olympics in a dispiriting blow to the already unpopular Shinzo Abe government.

Last month, Japan suspended its visa waiver program for South Koreans and started asking them to stay at designated facilities for two weeks and refrain from using public transportation -- a move that Korea decried as having come without prior notice.

In a tit-for-tat response, Korea also halted a 90-day visa-free entry program for Japanese visitors and imposed special entry procedures that subject Japanese to temperature checks, health documentations and other paperwork at airports.

Tomita said he highly views South Korea's handling of the heath care emergency based on close cooperation among government officials and private citizens, while calling for stronger cooperation between Seoul and Tokyo in surmounting the pandemic.

"President Moon Jae-in called for the two countries to work together to overcome the crisis during his commemorative speech on March 1," he said, referring to the day marking the 1919 public uprising against Japan's colonial rule.

"Sharing his thought, Japan will strive to promote cooperation," he added.
(END)