SEOUL, April 9 (Yonhap) -- While he was stuck in his hotel room in Seoul over a recent two-week self-isolation amid the coronavirus pandemic, LG Twins' infielder Roberto Ramos wasn't just sitting idly by, wondering what to do with his time.

On top of working out to stay in shape the best he could and preparing his own meals, the first-year Mexican player in the Korea Baseball Organization (KBO) kept himself busy doing some advance scouting work.

Ramos went through clips of multiple KBO pitchers that he'll be facing in 2020, and one particular hurler caught his eyes: Kia Tigers' star left-hander Yang Hyeon-jong.

"He looked like a good all-around pitcher," Ramos said Wednesday at Jamsil Stadium in Seoul, where he rejoined the Twins for training following the conclusion of his quarantine period. "(Coaches) said he's one of the best pitchers, so I paid a little more attention." 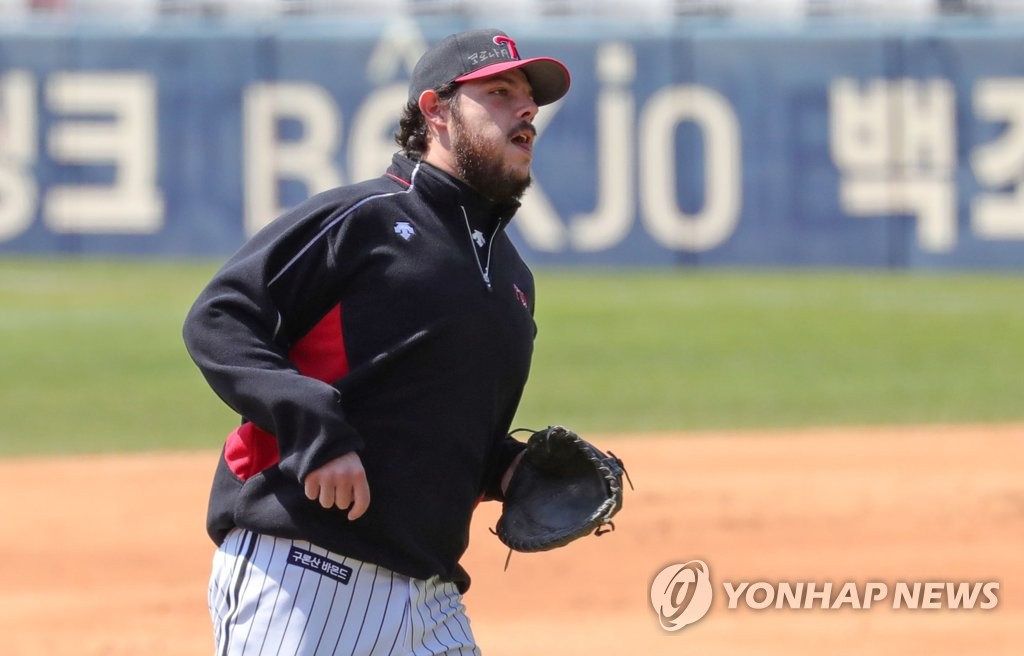 And Ramos, who said he "tried to do as much as I could baseball-related," picked a good one to watch. Yang won the regular season MVP award in 2017 after going 20-6 with a 3.44 ERA. He picked up his second career ERA title in 2019 with a 2.29 mark and had a 16-8 record. As one of the most durable starters in the league, Yang is the only KBO pitcher to have tossed at least 170 innings in each of the past six seasons. He is eyeing a jump to the major leagues after this season.

Ramos, who bats left-handed, hit .250/.331/.467 against southpaws last year in Triple-A, compared to his .331/.425/.624 line against right-handers. A former 16th-round draft pick by the Colorado Rockies, Ramos will be asked to do damage against all types of pitchers for the Twins. He launched 30 homers and drove in 105 runs in 127 Triple-A games in 2019, and the Twins would be ecstatic to get similar numbers from him this year.

The Twins haven't enjoyed any consistent production from their foreign hitters since Luis Jimenez in 2016. Jimenez scored 101 runs and knocked in 102, while hitting 26 home runs and stealing 18 bags that year. But he was waived midway through 2017 following injury, and the Twins have gone through four foreign hitters since, with none playing more than 55 games for them. In 2019, the Twins ranked in the middle of the pack in runs scored, home runs and team batting average.

But when Ramos inked his US$500,000 contract with the Twins in January, this hectic stretch in spring, which has featured a delayed start to the season, probably wasn't what he signed up for. By the end of spring training in Japan in early March, South Korea was struggling so much to contain the coronavirus that the Twins sent Ramos and two other American players, pitchers Tyler Wilson and Casey Kelly, back to their home countries to be with their family. 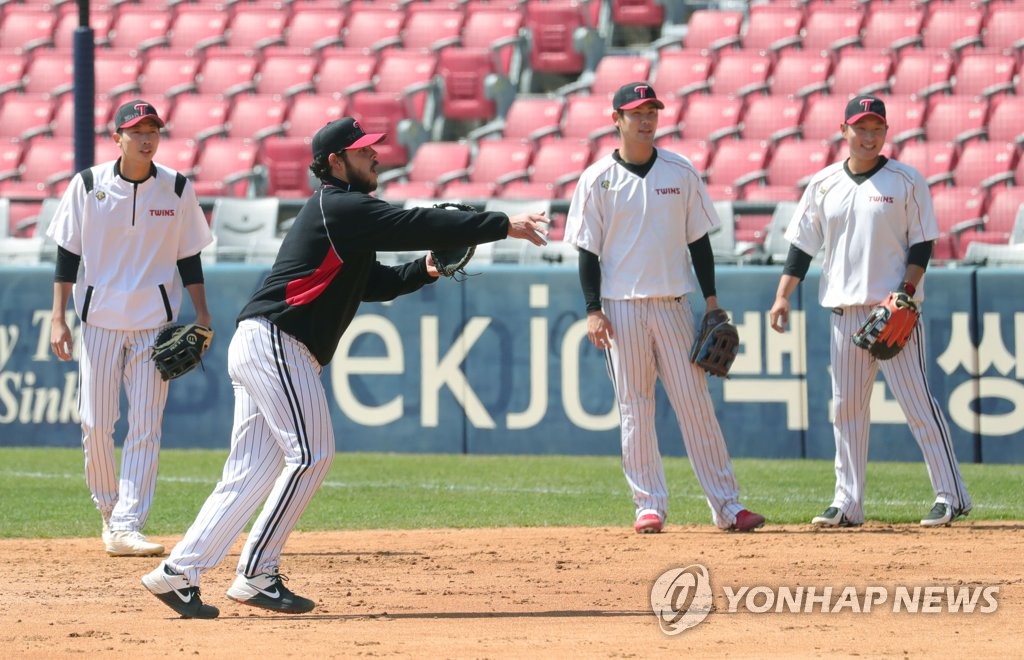 And as things seemed to be improving in South Korea and getting worse in the United States and Mexico, the trio were brought back to Seoul ahead of schedule. While the start of the KBO regular season had been pushed back from March 28, at least teams here were practicing and playing intrasquad games.

But there was another twist to Ramos' journey. He and Wilson rejoined the Twins on March 26, but then they were soon ordered into two-week self-isolation. The KBO had initially said foreign players arriving back from their home countries could resume working out with their teams, as long as they tested negative for COVID-19. But as the government decided to make the 14-day quarantine a must for all overseas arrivals to limit import cases, the KBO did an about-face and retroactively applied the self-isolation rule to Ramos and Wilson.

And Ramos is back with the Twins again, with hopefully no more quarantining for two weeks.

Ramos acknowledged the hardest part about being cooped up was "seeing social media and seeing my team out here training and playing, and me not being able to be here with them."

But even after this roller coaster ride, Ramos said he felt otherwise fine mentally and physically.

"I am really excited now to be back on the field. Being out here makes me happy," Ramos said. "I couldn't do a whole a lot inside the hotel room but did the best I could."

There's some dormant wanderlust inside the 25-year-old, who wants to see places other than his hotel and the ballpark in Seoul. But he also understands traveling will have to wait. 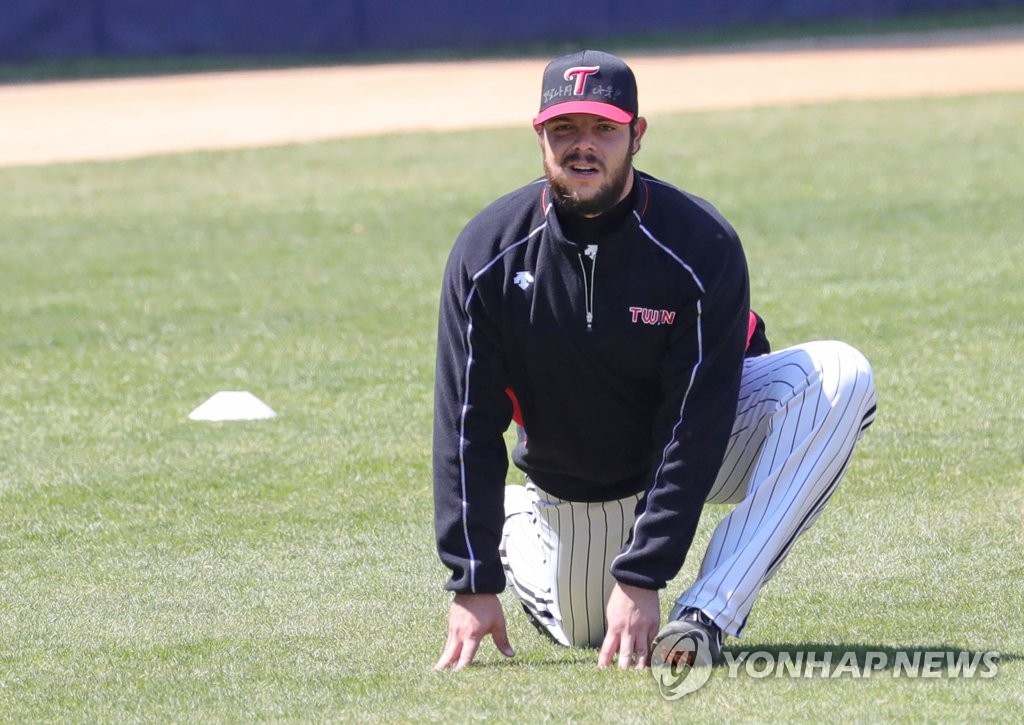 "I think this country is amazing. I want to go out and just see all the different things that are here," he said. "I still think this is not the best time to do all of that. Maybe a little bit further down the road, when the virus thing gets better, then we're able to go out and see new places."

Before Ramos left for Australia for camp, he told reporters that he'd already seen video of famously enthusiastic Twins fans cheering on their team at Jamsil. The virus pandemic has prevented Ramos from experiencing that firsthand, and he hopes the time will come soon.

"I hope that very, very soon, we can get this stadium full of fans and we can play in front of them," he said. "Hopefully, we can win this fight against the coronavirus and go back to normal life. I can't wait to play in front of fans. I am really looking forward to that."